Tongue-twisters and innuendo has Sgt in 'presents' of murder 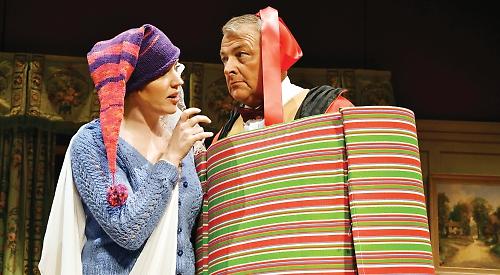 Dong Ding Murder Me on High!

THE subtitle of this show, Sleighed to Death, was a great clue as to the realm of puns, intriguing new portmanteaus and mispronunciations we were entering.

With this fourth instalment in the Pratt trilogy, playwright Peter Gordon has created a bunch of rogues, all characters larger than life in this murder mystery, centring around the jovial mishaps of one Sergeant Pratt, the Clouseau-like David Callister, and his highly capable assistant, the deadpan and pragmatic Constable Potter.

It’s Christmas Eve, sometime in the Thirties, and batty aristocrat Sir Walton Gates (Jeffrey Holland) is reunited with his long-lost brother Archie (Antipodean Mark Little, famously Joe Mangel in Neighbours), who had been banished to Australia some decades ago after a falling-out with their father.

Sir Walton has a stuffy personal secretary, Mrs McKay, a haughty second wife, and a Bohemian daughter who brings home her new boyfriend, who is something of an adventurer.

Each has their own eccentricities and mannerisms and we start to see how they interact, or try not to. Tensions arise, people are reunited and seasonal preparations begin: enter Sergeant Pratt.

Dressed as Santa Claus and raising money for the “Policeman’s Malevolent Fund”, Pratt wishes to entertain the members of the homestead for the evening, by way of magic tricks with disappearing ferrets and precious jewellery, with hilarious results.

With lots of lighthearted tongue-twisters, innuendo and the odd moment of slapstick, this was all much enjoyed by an appreciative and giggling audience.

One of the lines that got the biggest laughs was “If you want a proper double entendre, just wait and I’ll give you one.” With references to “Hercule Puerile” and a firm opinion that the name “Archie” was Japanese in origin, it was left to the patient Constable Potter to steer the hapless Pratt to the correct assumptions throughout each twist in the tale.

There were some wonderful comic moments and everyone lapped it up, as Pratt stumbled his way to the truth.