Class and time can't hide the inequalities of love 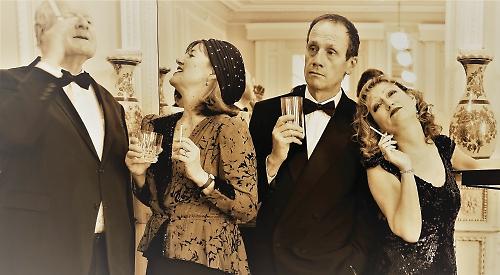 AT the time of its first public performance in 1939 Terence Rattigan said his play, After the Dance, was an attack on the so-called “bright young things” that surfaced after the First World War.

In this latest adaptation at the Kenton Theatre, the Henley Players are out to demonstrate that Rattigan’s ideas and themes of life and class in this era still resonate today.

Set in a top floor Mayfair flat in 1939, he pits the hedonistic generation of the Twenties against the more serious attitude of the up and coming one.

Husband and wife David and Joan Scott-Fowler are trying to live their youth all over again alongside John, a hanger-on from their youth, who lives with them.

Meanwhile, the next generation is represented by David’s cousin, Peter, and his fiancée, Helen, whose outlook is far more serious and see the lifestyle of the Scott-Fowlers as immoral.

Yet, unbeknown to Peter and Joan, Helen has fallen in love with David and is determined to make him go teetotal and free him for the seemingly uncaring clutches of his wife.

But Joan does love her husband and with the discovery of David’s illicit love affair, the play asks if there is a price to pay for the endless hedonistic lifestyle as the emotions repressed move from laughter to tears.

Director Rachel Head, 53, who lives in Dunsden, says the audience will be able to identify with the characters, irrespective of their backgrounds.

“I see it that the cast and I have a responsibility to the audience to ensure that they make them identify with the ways of these characters,” she said. “The mission is for us to deliver a production that is touching in some way so they understand and relate to what’s going on.”

She has looked to tap into the past experiences of her cast members so they can use them to get a better understanding of the roles they are playing. Ms Head said: “You have to get under the skin of those characters so you know what those characters would be feeling.

“It is not just a stylised look — it is not a pastiche of what happened in 1939, it is an explanation of people’s feelings and beliefs which is just as relevant now as it was then.”

To help develop the relationships between the characters further they have been rehearsing since Christmas without books so they can focus on their stage presence and how they interact with each other.

Ms Head said: “What I am looking forward to is seeing how the characters unfold and the character relationships develop and the audience finding out about them. I am very excited by it all.

“One of the other things we have been committed to is ensuring that there is some pace to this production. We want it to be lively as well as poignant.”

The set at the New Street venue has also been designed to mirror the time when the play is set and Ms Head, who first worked at the Kenton when she was six, is proud of what has been created.

She added: “We are very excited by what has been created. It will help the audience to feel like they are here in the top floor flat. There is vintage furniture and props — everything is in keeping right down to the shaving soap, newspapers and the ‘rubber’ duck in the bath.

“A lot of work has gone into making sure everything is in keeping with the era and to give the right atmosphere. There won’t be any moments where people could say something wasn’t around in that day.”

l After the Dance will be performed by The Henley Players at the Kenton Theatre from March 8 to March 11 at 7.30pm. There is a 2.30pm matinee performance on March 11. Tickets are £14. To book call the Kenton theatre box office on (01491) 575698 or visit www.kentontheatre.co.uk

The Henley Players would like to thank Phyllis Court for the use of their Thames Room to help capture the period of the play.