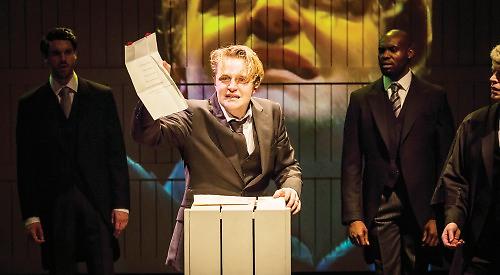 DRY-humping doggy-style? I know I never saw that stage direction in The Winter’s Tale when I did it for A-level. But it makes absolute sense — especially in this uncompromising production.

That scene, not the only sexual simulation in the play, comes quite early and is the ferocious imagining of an emotional king convinced his wife has cuckolded him.

Normally The Winter’s Tale relies upon the spoken word to imply the action. But this is the daring production company Cheek By Jowl — and they don’t take any prisoners.

They are faithful to the text of this late Shakespeare play, but within that they pick and tear at the words to rough up the landscape and make it more challenging.

It’s a rewarding experience, if dark. This is a study in the blackest and most violent of emotions: jealousy and lust.

King of Sicilia, Leontes, is a loving man who invests himself in his wife Hermione, friends and son. But he is quick to suspect infidelity when Hermione seems over-warm to his brother, King Polixenes of Bohemia.

Leontes has been bounding about the stage with arms around everyone, a gushing tap of uncontrolled love. Then he switches, almost instantly. The love becomes hate and jealousy, the mood bleakens and we see his imaginings projected back on to the stage.

His treatment of his pregnant wife is unforgivable — at one stage he kicks her in the abdomen, causing a premature birth and her apparent death.

Really there are very few laughs to be had in the first act of this play, but as a look at the way reason can be so easily overpowered by rage and irrationality it’s riveting.

The man is a tyrant, a king and powerful enough to order the burning of his own newborn — but that’s averted as members of the court conspire to take her away.

Come act two, it’s 16 years later and we are in Bohemia where all is sunny, bright and colourful. The abandoned daughter has fetched up here and is the adopted daughter of a shepherd. It’s festival time and the daughter, named Perdita, is a young woman about to taste the juiciest of the fruits of life.

This Perdita is not the sweet innocent we might come to expect. She is poised, confident, and has a mature voice which belies her years. She gives the impression of knowing what the juicy fruits are and that she’s already picked some of the leaves surrounding them.

So it’s party time and the Bard always enjoyed a joke whilst delving into the nature of existence, so we are treated to a Jeremy Kyle-style show for a short while.

The thief, Autolycus, sings and acts as host and there’s a sense of licentiousness about the place.

Shakespeare was careful in his late plays not to use his own Catholic god as a supernatural force — instead he called upon old Greek gods, fairies and sprites so that no blasphemy could be inferred — he lived in dangerous times.

If this all seems weird, it is — but no weirder than
X-Men or The Avengers.

But the Bard still looks for redemption and we see Perdita, her beau Florizel and Polixenes brought face to face with the now-repentant tyrant Leontes and his wife Hermione miraculously restored to life.

To be honest this is a loose plot and it all gets a bit uncertain at this point, but Cheek By Jowl make the best of it and create a doubt that Hermione was ever dead in the first place.

This is a thoroughly absorbing two and a half hours with one of the country’s most celebrated companies giving a dynamic and demanding interpretation.

If you can get a ticket — and they are like gold dust this week — then you’d be crazy to miss it.