This Joseph still has the X-factor 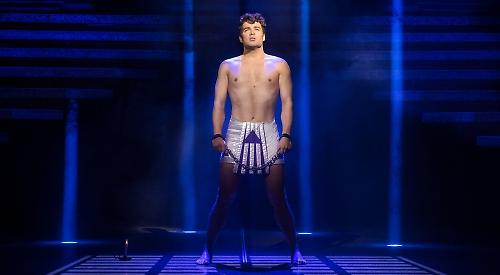 FROM its humble beginnings as a 15-minute cantata performed at a London school in the Sixties, Joseph and the Amazing Technicolor Dreamcoat has evolved to become a full-blown musical and a phenomenal global success.

A devoted fanbase greeted this performance, starring 2009 X Factor winner Joe McElderry as Joseph, and our expectations were surpassed.

Tim Rice and Andrew Lloyd Webber have crafted some of the most insanely catchy sounds of musical theatre and this show manages to cover an entire spectrum of musical genres and emotions — from Twenties Flapper music and calypso through to Parisian accordion-based ennui, Elvis-style hits and more.

It was wonderful to hear all the hits, including Close Every Door and Any Dream Will Do, and to reacquaint myself with songs such as Those Canaan Days.

In this powerful Biblical tale from the book of Genesis, Joseph is a man betrayed by his 11 brothers, who are jealous of his relationship with their father — as evidenced by the special coat he gives him — and fearful of the future his dreams have predicted, where he rules over them.

Joe McElderry truly embraced the role and hit every note, carrying through the feelings of Joseph from despair and sadness to wisdom and exhilaration.

There was strong support from the cast — including the powerful vocal chords of the narrator (Lucy Kay), a great Elvis-impersonator Pharaoh (Ben James-Ellis), and some very moving scenes with Joseph’s father Jacob (Henry Metcalfe, who also played Potiphar).

Joseph’s brothers provided some lovely harmonies and lots of action, while their array of costumes set off their brother’s wonderful technicolor dreamcoat well.

The Joseph choir sang beautifully and enhanced the harmonies, while also managing to sit still and remain attentive for long periods of time.

The setting of ancient Egypt allowed the creatives behind the stage and costumes to go for broke.

There was a clever arrangement of stairs to form a pyramid-like space in the centre, and much pomp and finery based on the customs, clothing, jewellery and decorations of that world. At one point Joseph’s cage flipped over to become a bed, while the backdrops of desert landscapes, palm trees, starry nights and a kind of Las Vegas feel for the Pharaoh gave the show a vivid appearance.

The costumes were truly fantastic, with Flapper girls, quarterbacks, slaves, kings, queens and Elvis, and of course the technicolor dreamcoat itself was absolutely glorious.

Having chatted to several people at the show, I found that all of them had come back to see Joseph again, time after time, for repeat enjoyment — and they were certainly getting up and moving along to this production.

My two boys were clapping their hands, singing along, dancing in their seats and even hugging each other during the grand finale, and I was thrilled when they gave it 10 out of 10.