The man who souled the world 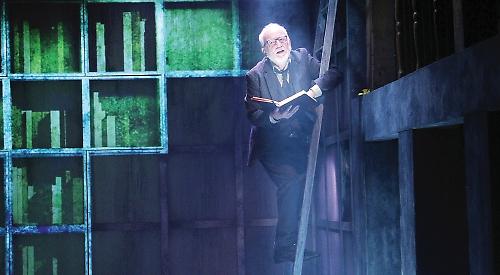 GOETHE’S dramatic poem Faust, written in two parts over a period of 60 years, has always been acknowledged as a weighty and complex tome that is multi-themed and challenging, dealing as it does with issues of morality, psychology, philosophy and spirituality.

Goethe himself is believed to have described it as a “poetic monstrosity”. So to stage it as a dramatic play, even in an abridged version, presents many challenges.

However, this has not deterred Ian McDiarmid, who has bravely adapted themes from both part one and part two into a gripping production which is now running at the Watermill Theatre in Bagnor.

McDiarmid has dispensed with the myriad of characters that Goethe employed and pared the dialogue down between himself as Faust, Mephisto (as this production calls Mephistopheles), and Gretchen, the object of Faust’s desire.

The moral tale of Faust having traded his soul with Mephisto for the pleasures of the flesh with catastrophic result is easily apparent, but Goethe was additionally concerned with exploring spiritual and philosophical dilemmas while also addressing the political and moral implications of behaviour — all of which McDiarmid attempts to convey through focusing chiefly on Gretchen’s seduction and betrayal.

While the weight of the production falls on McDiarmid’s shoulders, he has convincing support from Daisy Fairclough as Gretchen and Jacques Miche as Mephisto, whose mime was particularly impressive when speaking with Faust’s voice — a nice touch to remind audiences of the theme of Faust’s total submission to evil. But it is only fair to say that the other stars of the show were video designer Zsolt Balogh, lighting designer Elliot Griggs, and composer and sound designer Richard Hammarton, who produced striking effects that greatly contributed to the atmosphere of the production.