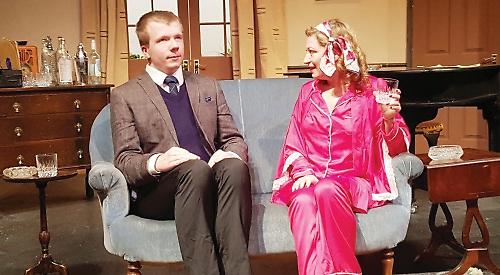 IT was a bold choice by Henley Players to take on as its current production — Terence Rattigan’s recently rediscovered After the Dance.

Because what appears at first glance to be another brittle social comedy of the interwar years proves to have some profound emotional depths.

Set in the year of its original production, 1939, the play’s central characters, David Scott-Fowler and his wife Joan, have spent the last 20 years entirely in the pursuit of pleasure. In their top-floor Mayfair flat, their life revolves around drinking, gossip, and endless parties with their equally vacuous friends.

They all share the one belief — that anything to do with work, or society in general is a bore, and that politics is the ultimate “torture”. By contrast, the younger generation — represented here by David’s nephew Peter and his fiancée, Helen — deplore this attitude to life which they regard as feckless and immoral.

In particular, Helen, who has fallen in love with David, sees it as her mission to reform him by stealing him away from Joan, whereupon the play begins to take on darker tones.

With a compact stage setting, director Rachel Head ensured that a brisk pace was set from the beginning and maintained throughout, with plenty of variation of stage pictures achieved to suit the action.

In the leading role of Joan, Gráinne Harling showed a stylish ease well suited to the period and mood in the early scenes, then managed with equal facility the transformation to pain and sadness as the drama unfolded.

Richard Evans’ portrayal of her husband David was full of interest and variety, and showed the underlying selfishness of the character well.

His scenes toward the end of the play were particularly effective: firstly with Harry Petrie, playing his nephew Peter, a forceful and impassioned performance; and secondly with Tim Green playing his old friend John Reid, who imparted a delicious dry humour to many of his lines.

Rachel Head herself took over the role of Helen at short notice and delivered the part with a pleasing assurance and sense of ruthlessness as she sought to redeem what she regarded as this decadent man.

Jason Fox made a reliable butler, and George Petrie a convincing doctor.

Katharine Horrocks and Margie Barrass were typical members of the party set, each with what we would nowadays call a “toy boy” in tow, played by Harrison Ridge and George Petrie respectively.

Michael Mungarvan as the owner of a window-cleaning business in Manchester, successfully persuaded the idle John Reid to go and work for him, while Liz McEwen managed a lot of knitting in her role as David’s secretary.

Overall this proved to be a most entertaining and moving piece.