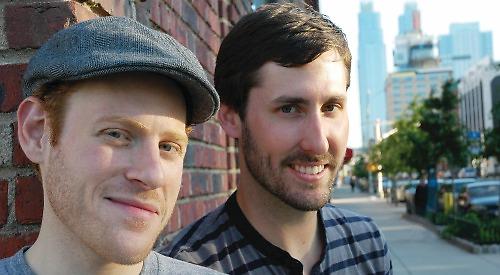 A HENLEY theatre producer is dreaming big — after a YouTube search helped her find a new musical from across the pond to put on in town this summer.

Daisy Smith’s first show under her own name was in July 2015, when her company How Very Events staged a four-night run of the award-winning Broadway musical The Last Five Years at The Studio in New Street.

Now operating under the name How Very Productions, the 31-year-old married mum of one and her team will be returning to the 60-seat venue next door to the Kenton Theatre from May 31 to June 3.

This time, though, her choice of material is altogether more adventurous — a musical by two young New Yorkers that has never previously been staged in full anywhere in the world.

Bromance: The Dudesical is the work of writing partners Kyle Ewalt and Michael Ian Walker.

Like an awesome buddy movie come to life, the show reveals a world of beer, brotherhood and brocabulary.

Subtitled “Because every guy needs a wingman”, Bromance follows the comic misadventures of a group of friends after one fateful St Patrick’s Day in Chicago.

When Marty, a lonely IT guy who is new in town, meets Tom, Dick and Harry, he desperately wants to be part of their clique.

Amused by his naïveté, Dick decides to take Marty under his wing, but first convinces his friends they need to school the newcomer in brotocol — the rules, joys and importance of being a real bro.

In order to prove his loyalty, the boys then take Marty on a series of “dudeventures” that get progressively crazier and more dangerous.

For Daisy, a big part of the show’s appeal is its focus on the unfairer sex — something of a departure from the usual concerns of musical theatre.

She says: “It’s a show you can take your boyfriend to and he won’t hate you for it. It’s a night at a bar with the witty banter provided for you. It will be an immersive, funny and joyful night out.”

Herself a former member of the Henley Amateur Operatic and Dramatic Society, Daisy plans to take a leaf out of the group’s playbook by staging Bromance “in the round” — something HAODS did back in October with their production of The Innocents, based on Henry James’s novella The Turn of the Screw.

On that occasion the setting was the drawing room of James’s possibly haunted house — but this time around The Studio will be transformed into the Chicago bar that forms the backdrop to the events of Bromance: The Dudesical.

Says Daisy: “The show is very ‘boy humour’ and it’s fun and we kind of wanted to do something different with it and actually have The Studio be the bar. The idea is to have my front-of-house staff be more like waiters and waitresses in the bar and make it a really cool kind of evening, rather than just going to a theatre to watch a show.”

Daisy’s ambitions for Bromance do not stop at the doors of The Studio — with the plan being to transfer the show to the capital in September.

“We’re hoping to get a couple of London venues to come out to see it, to see if they would like to take it in the autumn,” she says.

The aim is to find an off-West End home for the show — followed by a possible Edinburgh Festival run in August 2018.

With all this in mind, Daisy — who was recently nominated for the Sue Ryder Women of Achievement Awards — has recruited an award-winning theatre director and a top West End musical director to take the show forward.

She will also be holding auditions in London later this month to find her cast of five. In addition to the four “bros” there are eight girls in the show — who will be portrayed by one very hard-working actress.

The show’s writers, whose most recent project is The Lucky Ones — a musical telling the real stories of American lotto winners — have confirmed that they will be flying over to attend Bromance: The Dudesical’s first night on Wednesday, May 31.

So how did Daisy come to secure the rights to the show?

“I was going to put on a charity concert because I was bored and wanted to put something on,” she says. “I wanted to find some funny boy duets because I really couldn’t think of any.

“So I was on YouTube, just looking at funny duets. I found one — a song called You Get Me — but couldn’t find the sheet music or anything for it. So I contacted the writers, Ewalt and Walker, in America. I just emailed them, saying ‘It’s a great show, what have you done with it? Is it a whole musical? What’s the deal?’

Speaking from New York earlier this week, Ewalt and Walker said: “It’s great — the internet, and YouTube in particular, has really changed the way musical theatre is discovered, and it has been great to us.

“We sell sheet music all over the globe to people who discover our work on YouTube or our website, and it’s always a thrill to know our music is being performed in other parts of the world.

“This is the first production that has come our way from something like this — which was certainly a surprise at first. But after speaking with Daisy we quickly realised that she’s not actually that random at all, and that she and the entire team behind the show really know what they’re doing and have a great vision for it.

“It’s so cool to think that Daisy discovered the show by chance and now that has led to this exciting production.”

While the show’s subject matter may seem a little culturally specific at first glance, films like Dude, Where’s My Car and TV series such as How I Met Your Mother have already proved popular on this side of the Atlantic, helping to spread the bro subculture beyond America’s shores.

As portrayed by Neil Patrick Harris, one of the main characters in How I Met Your Mother, Barney Stinson, even went so far as to write a book called The Bro Code that set out the rules and accepted etiquette of being a bro.

Ewalt and Walker are happy to acknowledge the character’s influence, saying: “He is, without doubt, one of the great founding
bro-fathers.

“For us, and we don’t want to give too much away because you’ll see a lot of this in the actual show, we were inspired to write the show after watching a very funny bromance develop in front of our eyes on St Patrick’s Day — which is a big day for bros in the US — a few years ago.

“A good friend accidentally stole someone else’s drink. He and the ‘victim’ were both so drunk that instead of fight about it they decided the situation was hysterically funny.

“Before the night was done they had exchanged numbers, made plans, got jealous that the other wouldn’t really call, and were convinced they were meant to be friends forever.

“It was so funny to watch their whole manly relationship unfold that we decided we should turn it into our next musical.

“Sadly, in the real-life version, the two guys never did call each other and become true bros. Luckily, things work out differently in the musical.”

Safe to say, Ewalt and Walker are looking forward to seeing their work brought to life this summer.

“We’ve both been to the UK before and in fact Michael went to graduate school in London — he got his MA at RADA and King’s College — so we’re really excited to return and have our work done in London.”

Tickets for Bromance: The Dudesical are £20 and can be booked by calling 07983 333757 or emailing info@howveryproductions.co.uk