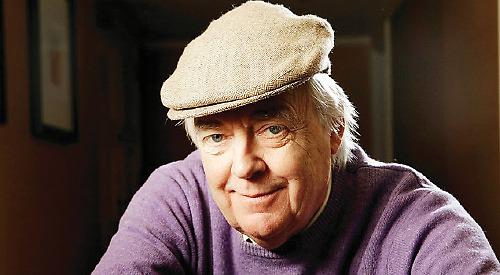 HAMBLEDEN Valley resident Sir Tim Rice is among a galaxy of showbiz names who will be paying tribute to Dame Vera Lynn ahead of her 100th birthday later this month.

100: A Tribute to Dame Vera Lynn is an all-star variety show taking place at the London Palladium on Saturday, March 18.

Still known as the “Forces’ Sweetheart”, the singer’s birthday is two days later.

The show will tell the story of Dame Vera’s incredible career — from when she started performing professionally at just seven years old, through the war years and right up to the present day.

Directed by the award-winning Dougie Squires and with all music performed by the Royal Air Force Squadronaires and Salon Orchestra of the RAF, the show features a host of respected celebrities from stage, screen and the music industry.

The Chelsea Pensioners, Pearly Kings and Queens of London, Swingtime Sweethearts, Sixties Tiller Girls, Young and Second Generation Dancers, Maida Vale Singers and young performers from all over the UK are also set to appear in the tribute show.

Proceeds from the event will be donated to the Dame Vera Lynn Children’s Charity, which supports children with cerebral palsy and other motor-learning disabilities.

Dame Vera said: “To have reached my hundredth year is in itself an achievement — with all the many memories that one collects over the years, the different places and the wonderful people one meets, and the many, many fans from across the world who have supported me.

“The show on March 18 will be a wonderful evening and I am delighted that it is helping to raise vital funds for my charity, a cause I have been involved with since 1955.”

Sir Tim said: “I have known Dame Vera personally for half a century and have been her fan for considerably longer. She is one of the most important singers of popular songs that this country has ever produced and I am honoured to play a small part in her century celebrations.”

Tickets for the show start at £50 and are available from www.dameveralynn100.com

What is your most poignant moment over the last 100 years?

Performing We’ll Meet Again to just two injured servicemen in a tent whilst I was in Burma.

Old! Old in body, but young at heart.

We’re 70 years on from the end of the Second World War, what are your thoughts on the world today?

At the age I have reached today I think there are many people who do not hear or pay attention to what is said to them by elderly people. We have attained a vast experience of life and it is so frustrating to be ignored. We still have wars, segregation, poverty, injustice and in a world where we have advanced so much in technology and sciences have we really learned how to live with each other?

What is your secret to a long life?

Taking an interest in everything around me

If you could send a message back in time to your 19-year-old self, what would it be?

Believe in yourself and keep an open mind. Never judge a book by its cover — give people an opportunity to prove themselves and always remember your roots

Do you have a message for all of your supporters/fans today regarding your charity and the celebratory show at the Palladium?

To have reached my hundredth year is in itself an achievement — with all the many memories that one collects over the years, the different places and the wonderful people one meets and the many, many fans from across the world who have supported me.

The show on March 18th will be but a tiny insight into my career from when I started professionally on stage at the age of seven, through the war years right up until the current day. I am sure it will be a wonderful evening, as many of my dear friends from the business will be performing and I am delighted that it help raising vital fund for my charity — The Dame Vera Lynn Children’s Charity — which supports children with cerebral palsy and other motor learning difficulties, a cause I have been involved with since 1955.

The Palladium holds very special memories for me, and I am thrilled that the Royal Air Force Dance Orchestra, The Squadronaires, will be there as my late husband was a founding member.

You must have met The Queen on many occasions and recently received The Queens honours — is it still a humbling moment?

Why did you set up your charity?

One of my greatest achievements alongside David Jacobs, Lady Jane Westmoreland and Wilfred Pickles was bringing the issue into focus and establishing the school for parents.

The school, designed for babies and children under five years old with cerebral palsy and other motor learning difficulties, was renamed a few years ago and it is with pride that we have now moved the service to a new centre in East Sussex.

“My role as president of the charity is still hugely important to me. For a family to be suddenly and unexpectedly faced with the news that their child is affected by cerebral palsy is a life-altering experience. The special attention that their child will need in his or her early years is woefully lacking in the public sector.

The free service that our charity provides is a lifeline to families. The charity will support them through the early years and help to ensure that their child achieves their maximum potential and that more children and future adults will be able to take a full and active part in their own lives and make a meaningful contribution to society.

In recent years what performer do you admire the most and why?

Hayley Westenra. I really admire her voice and character. I’m also very fond of The Swingtime Sweethearts, who have done so much work for my children’s charity.

Who most inspired you in life and why?

There have been so many people over the years that have inspired me for so many different reasons — I couldn’t possibly single out one person.

If you could do it all again would you do anything differently?

No, I’d do exactly the same. I have been incredibly fortunate to meet some wonderful people over the years and very grateful to have longevity in an industry that is not known for its security.

What advice would you give any young singer today?

Practice hard, enjoy your music and stay true to yourself.

What was your scariest moment?

I can’t ever remember being scared as I have always had good people around me.

What was your most heartbreaking moment?

Seeing all the wounded boys and thinking what their lives were going to be like.

What is your most cherished memory from those times?

Performing to the boys in Burma.

What made you sign up to perform for the troops and put your own life on the line? Was there a catalyst?

I knew that some entertainers were going to India and Burma but they were travelling to the cities rather than the jungle. I felt that someone needed to go and support these young men and deliver messages of hope from home.

When the news of the war first broke, how did you think you were going to help? Did you instantly think of performing or had you considered being a land girl or help in a factory?

I only ever wanted to be the best singer in the land with the best band in the land and at the outbreak of war I thought the next day I would be working in a munitions factory. But entertainment was so important that is where I stayed — even with my new album coming out later this month.

Out of your amazing repertoire, what is your favourite song to perform and why?

Out of all of my songs it was always the lyrics that were most important to me rather than the music itself. We’ll Meet Again is one I am probably most remembered for and it still holds a very special place in my heart.

Auf Weidersh’n’ went straight to the top of the pops in the United States and Wish Me Luck was always the favourite in Denmark. But I suppose We’ll Meet Again was the universal song, although the Queen’s favourite, I believe, was Yours — although I believe it now to be The White Cliffs of Dover. To be safe, both are in the tribute concert.

What was the overall feeling from the troops when you were out there?

They all knew who I was before I arrived in Burma, but to actually see me in the flesh experiencing the life they were leading I know was a great comfort to them.

You were given the title “the Forces’ Sweetheart” — did you think at the time you deserved it or did you simply see yourself as someone who was doing their job during the war just like the soldiers?

I have always felt very honoured to have ever received that title and still feel incredibly proud to hold the title today.

What was your most rebellious moment during the war?

I was warned on occasions not to travel to certain places. However, I just knew I had to do it — so I did.

Why/when did you decide to come home as the troops remained for many months?

I cancelled or postponed several engagements in order to go to Burma but I was determined to go where nobody else in the entertainment world had gone and my decision to come home was because I had done what I set out to do. Job done, or so I thought and now look at me.

Did you ever think that you would go on to live such a famous life or did you think that your life would just return to normality after the war?

All I ever wanted to do was sing, so I assumed once the war was over that’s what I would continue doing

Did you carry on with your career as although the war may have ended the country needed to rebuild and needed a beacon of hope?

One of the main reasons I worked with the BBC to set up Sincerely Yours was to enable me to continue talking to the boys on the front line and bring them messages of hope from home.