Thriller gives a flavour of 1939 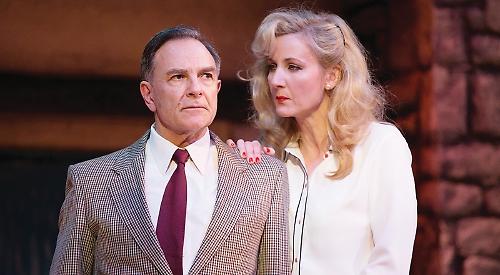 IT felt fitting in these turbulent political times that director Samuel Clemens brought us a poignant and gripping thriller set in 1939, when society was becoming more and more fragmented and the world was on the brink of war.

Young English couple Peter and Suzy are tucked away in a remote rustic cottage in Provence, with Peter selling his paintings for a living while Suzy works in a local hotel.

Occasional and eccentric visitor Josef (Andrew Fettes) is a dear friend and fiercely loyal. Our curiosity is piqued by Josef’s Germanic twang and dishevelled appearance, as if he is in hiding and already fighting a battle.

While Suzy has half an eye on their future together, unbeknownst to her Peter’s past is about to catch up with him.

In steps mysterious and expensively-dressed Englishman, Ross, played by a lively, vibrant and energetic Brian Capron.

As we learn more about Peter’s history, and that he was once incarcerated in Ross’s “tender loving care”, tensions mount.

With solid, believable and sympathetic performances from all the cast, they had us on the edge of our seats as we awaited the outcome.

Gary Turner as Peter and Lara Lemon as Suzy showed the inner conflicts sometimes inherent in any couple, layered with a more loving side.

There was immaculate attention to detail and the scenery and music were used to create an atmosphere of unease with the rumblings of danger ever present in the background.

The radio was used for announcements indicating the imminent outbreak of war, with actual broadcasts from Britain and Germany’s leaders being used, lending the play gravitas and giving the audience food for thought.

As the twists and turns became apparent, the audience was captivated by the guessing game as to who was innocent, who was guilty of what and whether we should go on the evidence before us.

Marked with flecks of comedy throughout, Strictly Murder managed the feat of being simultaneously warm and disconcerting, as with all the best murder mysteries.

Oh, and if you’re wondering about the director’s familar-sounding name, the play was written by his father, the renowned screenwriter and television producer Brian Clemens OBE, in 2006. The family are related to Huckleberry Finn author Mark Twain (the pen name of Samuel Langhorne Clemens).

l Strictly Murder is playing at the Theatre Royal, Windsor, from Wednesday, May 17, to Saturday, May 20.