Top comedy's back at the crease 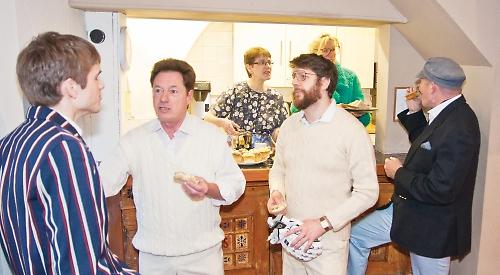 THERE’S more to cricket than hitting boundaries and catching people out — or at least that’s the case in the evergreen stage comedy Outside Edge.

The 1979 play by TV writer Richard Harris has been chosen as this year’s spring production by the Sinodun Players. It’s a Saturday afternoon in summer and an important local cricket match is under way.

But while the team captain is trying to keep his men focused on the game, there’s a slow-burning meltdown among their wives and girlfriends in the kitchen.

Much bickering, back-biting and witty one-liners eventually lead to stand-offs and bedlam. Which is ultimately more important — the tea or the match?

First staged by the Sinodun Players in 1987, Outside Edge is now seen as one of the classic English stage comedies of the late 20th century.

Pete Smithson, who lives in Goring and is playing team captain Roger, is reprising the role — which he first played 17 years ago with the Goring Gap Players.

It was only the second time he had ever been on stage and his first lead role. But the experience whetted his appetite for more and he has since clocked up some 68 roles with groups including the Sinodun Players, the Goring Gap Players and the Chiltern Players.

He said: “My character is an organised controlled total male chauvinist pig who relies on his wife but won’t admit it. All that is important to him is winning. He loves his wife but not so much as when he’s trying to win a game of cricket.

“After nearly 17 years and with more experience, I’m hoping to do far more justice to the role than when I first played it. It is a very funny play with characters people can definitely relate to. I’m really looking forward to playing Roger again — I can still remember the lines from the first time!”

Director Gloria Wright added: “The amount of laughter from the cast at our first read-through bodes well for this play and I know audiences will enjoy it as much as they did when we first performed it.

“We have a great cast and a fantastic set design and we’re looking forward to introducing it to a new generation of theatregoers.”

Outside Edge runs from Wednesday, March 29, to Saturday, April 1, at the Wallingford Corn Exchange, with performances at 7.45pm each night.