On the page and on the stage, Jane's still goth what it takes 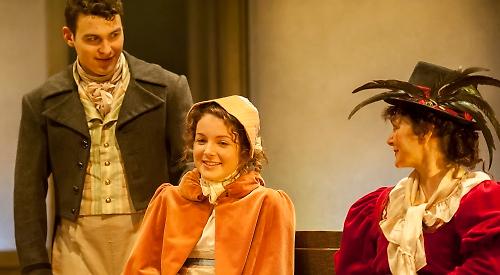 ALTHOUGH it has been 200 years since her death, Jane Austen has in her writing simultaneously encapsulated the era in which she lived and captured the timeless nature of human behaviour, making her words feel as relevant today as ever.

This satirical look at people’s drives, motives and coping methods, such as the escapism and melodrama of the Gothic horror novel, which you could say has evolved into an extended repertoire of films, soap operas and magazines, was adapted by Tim Luscombe and brought to us by director Karen Simpson, herself a director of a restored Regency theatre.

Seventeen-year-old Catherine Morland has been taken to Bath by friends of her parents, where she experiences a brief foray into high society.

With no acquaintances initially and finding herself a wallflower observer at the edges of the local balls, she is able to escape into the far reaches of fantasy by reading and delving into her stories — her favourite being Ann Radcliffe’s The Mysteries of Udolpho.

As she slowly meets new friends and potential suitors along the way, Catherine is going to have to face reality sooner or later — if only she can find fact as interesting as fiction. Then she finds herself enjoying a prolonged stay at Northanger Abbey.

The cast were adept at bringing this 18th century world to life, with its odd mixtures of snobbery and pragmatism as some tried to get ahead and others tried to smooth a path.

Eva Feiler as Catherine and Harry Livingstone as the elusive Henry Tilney (and Valancourt) crafted a believable cat-and-mouse courtship, while the meddling and misbehaving Thorpes, the John Cleese-like General Tilney, elegant Eleanor and fashionable Mrs Allen all added a certain something.

It must have been great fun as a cast to also operate in the parallel universe of the Gothic horror scenes — featuring an Igor-like maid, caped figures and a dramatic sense of urgency as Count Morano, Valancourt, et al.

As each character gets carried away with their own particular set of notions, life events have a way of bringing them back to earth with a bump. The refinements of the Regency era were evident in the beautiful dresses and smart costumes, where the actors looked right at home.

The adaptable and versatile scenery, music and lighting lent itself to the grand themes and the abbey, with one memorable feature being the use of a candle to throw an exclaiming and despairing Catherine’s shadow on to three separate panels, illustrating a crescendo of emotion as she slowly moves towards maturity.

In an age of soundbites and depleted concentration spans, this is a tribute to the longevity of the novel.