Game of two halves is playful all wright 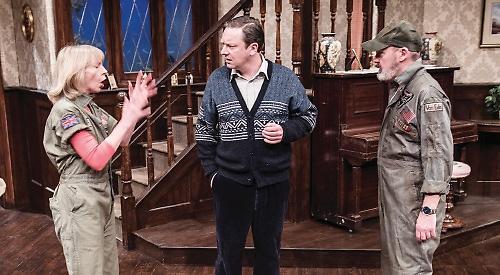 TALK about a game of two halves! Improbable Fiction is really two consecutive plays but completely dependent on each other.

This is Alan Ayckbourn at his most playful, throwing away the rulebook and starting from scratch.

It works rather like an eBay auction: steady, careful bids at the beginning but finishing in a mad flurry.

At the end of the Mill at Sonning’s production we feel like we’ve been on an out of control fairground ride which has managed to stop safely.

The first act is a relatively quiet sitcom centred around a writers’ group. This is where the playwright breaks Rule One because not much happens. The characters rub up against each other and we see the frictions, there are jokes and it’s funny in a gentle way. The pace is maintained by some lively movement from one character — the irascible Brevis Winterton played by Laurence Kennedy.

But finally, in the dying seconds of this first act, we get a taste of what’s to come.

Out go the dull inadequates of the writers’ group and in come the fruits of their imaginations — their stories and characters come alive in the second half and we are treated to a bewildering and breathless stream of disconnected stories — linked by one theme, the chairman of the writers’ group, who is using it all as material to liven up his dull existence.

The changeover is as shocking as having your heart restarted. Suddenly from nowhere we are faced with a Gothic 19th century novel with its evil and innocent characters. These quickly morph into a Twenties-style murder investigation calling upon Agatha Christie and — with a poetry-spouting DCI — Inspector Morse.

The action swings between these two plotlines until a third is introduced — one of the writers’ group is a barely literate science fiction writer, so his strand involves alien hunters dressed in military overalls.

Now we have a three-way almost revolving circus. The skill from the playwright and the actors here is that the cast of seven manages to play every role from louche 19th century aristocrat to sweet goblin — yes, one of those works its way in as well.

Your reviewer saw Ayckbourn’s original of this play 12 years ago and you can safely assume that this version, with the Mill’s customary expertise and energy, matches it at the very least. That’s helped by the director, Robin Herford, being both a regular with Ayckbourn and at the Mill.

The result is a varied night of entertainment which just about covers all bases except sex — and it really isn’t needed here, there’s quite enough going on already, thank you.