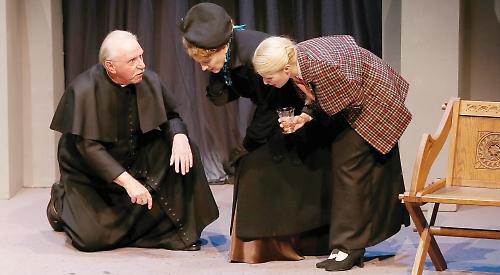 IT’S always fun to try and play amateur detective along with a whodunnit and watching GK Chesterton’s Father Brown at work was no exception.

Ella Hope has an archaeologist Aunt Diana who has in her possession an ancient dagger, which has a mysterious inscription and is rumoured to be cursed.

It is one of only five in existence, and when Ella’s former fiancé writes to her demanding the dagger, a murderous story unfolds.

Aunt Diana is firm friends with the observant and wise Father Brown, and when he hears of this letter he steps in to help.

Famed for his role as Detective Sergeant George Toolan in A Touch of Frost, John Lyons as Father Brown was a wonderful stage presence, stoic though not averse to a daytime tipple, ruminating on the events and evidence before him.

As Diana, Ella and Ella’s current beau Angus (played by the Chesterton-inspired play’s writer, John Goodrum) tried to avert a crisis, Father Brown sought to ascertain how someone could somehow first place and then snatch a body and go completely unseen.

John Lyons brought us a highly believable priest, bringing all his experience to bear on the situation.

He clearly absorbed all the goings-on, chewing things over, and his expression when the penny dropped was a treat.

The tension of the piece was complemented by the accompanying music, which was Bernard Herrmann’s powerful score from the film Psycho. This aided the play as it was quite a wordy piece, so the haunting notes punctuated the whodunnit and gave it a juddering edge.

An austere stage, which was at points starkly lit for added spookiness, lent itself to the proceedings well, with figures appearing in the gloom.

There were enough twists and turns to keep the audience guessing without flagging and a tense ending — with a satisfying dotting of ‘i’s and crossing of ‘t’s.