Come fly with David in his colourful space race 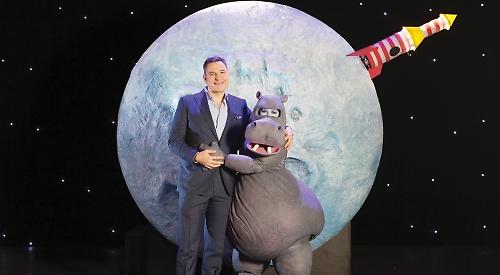 HE’S previously lampooned the world of aviation in Come Fly With Me, but David Walliams’s latest children’s production is setting its sights even higher.

The First Hippo on the Moon, which played at the Reading Hexagon yesterday (Thursday) and is coming to Oxford and Newbury in April, tells the colourful and outlandish tale of a space race between rival hippotami Sheila and her wealthy nemesis Hercules Waldorf-Franklin III.

It is based on David’s book of the same name, which was published in 2014, and features a supporting cast of jungle-dwelling creatures including porcupines, an ostrich, a giraffe and a narcoleptic gorilla.

The hour-long show will be performed by Les Petits Theatre Company, whose artistic director Oliver Lansley has adapted it for the stage with a mix of wordplay, musical numbers and plenty of toilet humour.

The characters will be brought to life using a combination of elaborate full-sized costumes and puppets created by Nick Barnes and Finn Caldwell, who have previously collaborated on productions of Dr Seuss’s The Lorax and Michael Morpurgo’s War Horse.

Following its launch at the appropriately-named Royal Hippodrome Theatre in Eastbourne last December, the show is now nearly midway through a 50-date UK tour.

Reviewing its opening night, the Times said it was “sweet and naughty enough to please Walliams’s littlest fans” while the Sussex Newspaper hailed it as “a really tremendous show that will thrill children and entertain adults all round the country”.

David, who attended the performance, told the audience afterwards that it was “so much better than the book”.

The 45-year-old, who grew up in Surrey, shot to fame with comic partner Matt Lucas in BBC One sketch show Little Britain and follow-up Come Fly With Me.

He first turned his hand to children’s writing in 2008 with The Boy in the Dress, a tale of a young boy’s flirtations with transvestism, and has since written nine other volumes including Gangsta Granny, Billionaire Boy and Awful Auntie.

In August last year, David made a surprise appearance at Heartbreak Productions’ open-air performance of his fifth book Ratburger at Caversham Court Gardens.

His works have now sold more than 11 million copies around the world in more than 45 languages.

David says of his latest
adaptation: “I’ve always been fascinated with the space
race of the Sixties and
wanted to do a spoof of
that. I liked the idea of
hippos going to the
moon as they’re the
animals least likely to.

“It’s a very visual book
with amazing illustrations
by Tony Ross, so this should
be a very colourful stage
production.

“I had loved
Les Petits’s
work for
many years
so I jumped
at the
chance to
work with
them. I love great children’s theatre shows, especially now that I’m a father, so I’m very excited to see this one.

“The book is full of humour and I know that they’re the perfect choice of theatre company to bring that out as their shows are so irreverent and funny. The best children’s shows work for grown-ups too and I’m sure this one will.

“I love seeing adaptations of my books and really enjoy the changes. I come from a background of writing for television, which is very collaborative, and have always enjoyed working with other people.

“Ultimately, you feel like a magician when something that was in your head becomes real.”

Despite finding fame through his grotesque television creations and landing a role as a judge on ITV’s Britain’s Got Talent, David says he gets the most pleasure from writing and has considered giving up comedy to focus on his literary career.

“I think it’s important that you write a story you would like to read. If you like funny stories, write a story, and if you like scary stories then write a scary one.

“You can never guess what it is that people want to read, so it’s better to write something for yourself and if other people like it that’s a bonus.

“If I could build a rocket and go anywhere in space, I’d like to go to Mars. You can forget the books and the comedy shows — I feel I’d definitely be remembered if I was the first person to go there!”

Mr Lansley said: “We were really keen to work on one of David’s books as we share the same anarchic sensibilities. He doesn’t patronise children, which is very refreshing — he isn’t afraid to be a bit dark.

“There was just something about The First Hippo on the Moon that caught our eye. A cracking, pompous female hippo as our lead, a jungle full of animals and a race to the moon — it just seemed so full of opportunity that we had to adapt it.

“David’s work is perfect for the stage because it has a great sense of fun. The characters are big, bold and silly but it’s never twee and there’s a delightfully twisted undertone to his work, which suits us perfectly.”

The First Hippo on the Moon is coming to the New Theatre Oxford on Friday, April 21, and Saturday, April 22, and the Corn Exchange in Newbury on Sunday, April 23, and Monday, April 24.

For more information on tour dates or to book, visit the show’s website at www.lespetitstheatre.com/shows/
david-walliams-the-first-hippo-on-the-moon