The time of my life? Stage version came pretty close 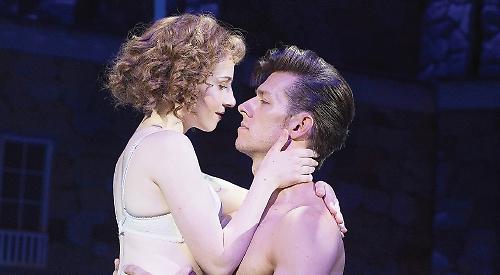 PUT simply, Dirty Dancing has been and will always be one of my favourite movies. I have watched it more times than I can remember.

Patrick Swayze will always be Johnny Castle to me. It was the film that put him on the map. You felt good each time you watched it, or is that just me? I know the words/lyrics and almost the choreography!

The Wycombe Swan was packed with women and a few odd men dotted around. It really is a girls’ show, although I am sure many men can relate to the movie — especially having had to go through many first dates watching it with their new beaus.

It really doesn’t disappoint as a show, but you must be open-minded when you watch “the classic story on stage”.

The costumes were the same, the scenes were re-enacted, and the classic songs — (I’ve Had) The Time of My Life, Yes, She’s Like the Wind, Hungry Eyes, Overload, Wipeout, Hey Baby — were all in there.

If I am honest, I felt at times that there were possibly too many scene changes — and some scenes had so few lines.

I realise the writer was needing to get all the chronological events of the movie over on the stage — not an easy feat with time/scenes.

The set was good. It moved fluently, maybe a little static on a few occasions, but the stage crew and cast worked tightly to ensure each scene was as it should be and it was effortless from that point of view.

Some of the music seemed unrecognisable, but this didn’t dampen our spirits — especially when Johnny Castle, aka Lewis Griffiths, made his first entrance dressed in his blacks and shades.

All the girls swooned, there was an air of excitement, but deep down I could only see Patrick Swayze standing there on the stage at that moment, and I felt a little emotional.

Dirty Dancing is so powerful for women all around the world — there is only one Johnny Castle in our hearts.

However, Lewis did a great job portraying one of the most iconic roles ever. It was always going to be tough stepping into big shoes and he did a great job. He had the moody, manly, sexy and aloof — almost distant — character of Johnny to a tee.

At times, I wanted his relationship with Baby to be more obvious than it was — there seemed little time during some scenes to really see that classic love developing, especially in the first half. The second half was much more animated and the bond was much clearer and was much more believable.

Baby, aka Katie Hartland, was adorable. She really was ‘Jennifer Grey’ with her goofy ways, political opinions and initially uncoordinated dancing. I loved the innocence and naturalness of her performance and believed in her the whole way.

Everything you wanted from the movie was in this production, albeit shorter and quicker, but it was all there and we came away from the evening tapping our feet and wanting to “dirty dance”.

A very well-cast show, an enjoyable evening and the Wycombe Swan was a great venue for this touring leg of Dirty Dancing.

If you haven’t got your tickets yet, and get an opportunity to do so, then go grab them and have “the time of your life”!