Riviera rendezvous is a scamtastic romp 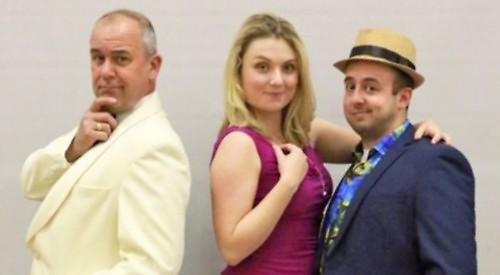 ORIGINALLY a hilarious Eighties film directed by the legendary Frank Oz and starring Michael Caine, Steve Martin and Glenne Headly, this amateur production had some big boots to fill — and it stood firm and delivered.

With some sublime musical numbers, raunchy renditions and downright bonkers segments, the ensemble from the Slough, Windsor and Maidenhead Theatre Company brought us much to enjoy — from speedy yet flawless costume changes to some absolute belters.

Consummate English gentleman Lawrence is feathering his nest with the rich pickings of the well-to-do tourists visiting his patch of Beaumont Sur Mer.

Masquerading as a wealthy prince and aided by corrupt cop Andre, his is a world of seamless decadence until the arrival of American Freddy, who is in a similar line of work.

Add to this the threat of The Jackal, another rogue who is rumoured to be circling the area, and the scene is set for layer upon layer of farcical comedy.

The fake accents, illnesses and frustrations were played out beautifully and to much amusement.

The attention to detail throughout was top notch, with little bistros, grand mansions and hotels and a fabulous moonlit backdrop.

Where the occasional gremlin tinkered with the generally excellent props, this led to some great impromptu ad-libbing and did not detract from the giggling audience’s enjoyment of the show.

With little Europhile nods to our friends on the continent, such as the odd yodel and accordion, not forgetting a Texan or two, this show had great fun with its scope.

The costumes included everything from austere nuns to racy négligées and a slightly deranged character in snorkelling gear.

Paul Freeman had a star turn as lothario Lawrence, ably abetted by sidekick and stooge Billy Reynolds as Freddy.

Phoebe Wynne as Christine brought sparkle and polish, while collectively the ensemble created an inviting and enticing scene. The dance moves, live music and vocals made you want to get up and join in!

There was a lovely little side story between Andre and his sweetheart, counterbalancing the deception going on elsewhere.

This was a jolly romp across the French Riviera. The cast may have been amateurs but they embraced their roles, going at full pelt. Much like the lovable rogues they played, they acquired a smooth, professional patina.