Writer's 'two by two' approach adds up to a comic masterpiece 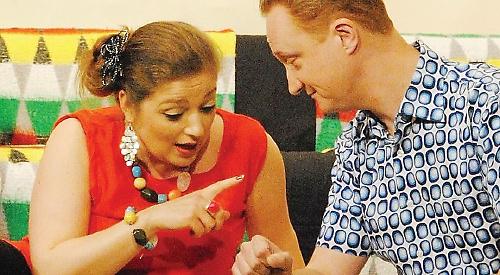 NO one could be more deserving of the rather hackneyed term “award-winning playwright” than Peter Quilter.

The West End and Broadway writer’s work has been produced in more than 40 countries and he has indeed been twice nominated for the Olivier award for best new comedy and best new play.

And although it is not the work for which he is best known, his Duets was the rather brave choice of the Chiltern Players, who brought the series of four one-act plays to Peppard Memorial Hall on Thursday, Friday and Saturday last week.

The plays, which were first published in 2010, tell of pivotal moments in the lives of four separate couples, and are usually presented together as four one-act plays with the same two actors playing all eight roles — an ingenious device that gives the actors a wonderful showcase for their craft in expressing their depth of understanding of the different personalities involved.

One middle-aged couple are on a blind date, having answered a lonely hearts ad.

Another couple comprise a wealthy millionaire and his secretary, who is obviously in love with him despite the fact that he is resolutely gay.

The next pair are on the brink of divorce but are on holiday together because they had already paid for it.

And the final pair are an undecided serial bride and her long-suffering brother, who is trying to persuade her to go through with the latest ceremony.

The scripts of all four plays are hilarious, but Duets is a challenging choice for any amateur company because all eight actors are automatically catapulted into leading roles which require an in-depth understanding of the psychology of the situations to really put them across.

The Chiltern Players under Tom Brabben’s direction largely acquitted themselves well, and Colin Silvester on sound and lighting did a sterling job with precision timing on every phone call, doorbell or clap of thunder as required.