A brief encounter with Celia's letters 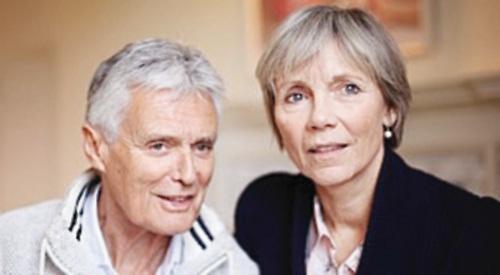 THE wartime letters of the actress Celia Johnson and her husband Peter Fleming are the focus of a special fundraising performance at Nettlebed Village Club later this month.

The couple’s youngest daughter Lucy Fleming will be joined by her husband — and fellow actor — Simon Williams for a reading of the letters in aid of the venue’s roof fund on Friday, April 21.

The show, entitled Posting Letters to the Moon, has been performed a number of times previously — most recently at Carnforth railway station in Lancashire, where many of the scenes for David Lean’s classic 1945 film Brief Encounter, in which Celia starred opposite Trevor Howard, were shot.

But this is the first time the piece has been performed in Nettlebed — just down the road from where Celia was living at Joyce Grove at the time of the letters’ composition.

Following the outbreak of war, she had found herself separated from her husband, who was away on active service for long periods, but the couple wrote to each other regularly.

Touching and amusing by turns, Celia’s letters tell of her experiences during the war — from coping with a large, isolated house full of evacuated children, to learning to drive a tractor, dealing with rationing, learning to surf during occasional holidays in Cornwall, and all the while accepting offers — when she could get away — to act.

Unable to commit to the often lengthy run of a stage play, she preferred the less time-consuming schedules of film and radio.

These allowed her to devote time to her family and her work for the Women’s Auxiliary Police Corps in Henley.

In addition to a number of patriotic wartime propaganda films and broadcasts, Celia’s most notable films of the period were In Which We Serve (1942) and This Happy Breed (1944), both of which — like Brief Encounter — were written by Noël Coward and directed by David Lean.

In the letters, Peter, the brother of James Bond creator Ian Fleming, writes about his adventures and trials working on military deception operations in India and the Far East.

Lucy, who put Posting Letters to the Moon together with her sister Kate Grimond, said: “It was a joy to discover these letters, and I hope the audience will find them as funny and moving as I do.

“The title is explained in the show. It refers to the difficulty of knowing how to get letters to my father, who was away for most of the war.”

Lucy and Simon’s appearance at Nettlebed is only the latest in a series of joint acting ventures.

The couple can currently be seen in cinemas playing Lord and Lady Wavell in Viceroy’s House, about the 1947 partition of India.

They also play estranged husband and wife Justin and Miranda Elliott in The Archers on Radio 4.

The April 21 performance of Posting Letters to the Moon will include an audience Q&A session — and Simon anticipates that a few questions about Ambridge might come up on the night.

He said: “Lucy plays my horrible wife, who I’m leaving in the story — it seems I’m divorcing her. Justin’s having an affair and I’ve asked Lillian [Archer], who’s a very popular character, to marry me, so there’s all kinds of things going on and a lot of people who come to see the readings are very keen to find out what’s going to happen!”

While Simon clearly enjoys every minute of working on the long-running Radio 4 soap, projects like Posting Letters to the Moon are much closer to home.

Lucy’s close resemblance to her mother, who died in 1982, has often been remarked upon — and Simon says this is something that is further brought out by the readings.

“She sounds incredibly like her. Which is why the letters are so moving, really. You can actually hear Celia’s voice — you know, that voice from Brief Encounter — you can hear it.

“She has a wonderful, light way of coping with emotion and such a lovely light sense of humour.

“The letters are wonderful — they describe what it’s like trying to be a young newlywed with a young family living in a great big house with lots of other children.

“And she was a policewoman in Henley and she was trying to plough and help run the farm with tractors and things.

“And then she was off making the films she made during the war and doing propaganda broadcasts and things.”

It sounds as though Celia — who was awarded a CBE in 1958 for services to the theatre, later becoming a Dame Commander — was juggling rather a lot during the war years.

“She absolutely was,” says Simon. “And all that on fuel rationing and food rationing and things. So the letters are full of interesting history as well as being funny and touching and romantic, you know? They’re wonderful.”

In keeping with the fundraising nature of the enterprise, the staging of Posting Letters to the Moon will be fairly minimal.

“This is just Lucy and me sitting on stools and reading the letters and filling in the gaps and the history and things,” says Simon.

“We’ve done it a few times in different venues and it’s a wonderful mix of history and lightheartedness — and bravery, you know? They were so brave.”

Simon, who has been married to Lucy for 31 years, will be reading the letters home written by his late father-in-law, who died in 1971. He said he had known Peter growing up, as their families were friends.

Much of Peter’s war service was highly secret at the time, but some details nevertheless emerge from the letters.

“But there’s not so much history in his letters because obviously his letters were censored, you know? There’s interesting background stuff about the war, but the details of what he was doing, he obviously wasn’t allowed to expand on that.”

The family thread that runs through the event extends to Nettlebed Village Club itself, as Simon acknowledges.

“Lucy’s great-grandfather [Robert Fleming] built the club, and so it seems rather fitting that we should be fundraising to get the roof rebuilt. It’s a wonderful great big building.”

A community grant has been awarded to the project by South Oxfordshire District Council and together with local donations and club funds the total raised so far is approximately £160,000.

With £80,000 still to be raised, various other fundraising events are being arranged and work is expected to start in the summer.

As well as being home to the Nettlebed Folk Song Club and Sam Brown’s Fabulous Ukulele Club, the club building — consisting of a large hall, a small hall, a bar and a billiard room — is used for a wide range of functions and community activities.

For Simon, looking ahead to the Nettlebed Village Club performance of Posting Letters to the Moon, there is something else that Celia and Peter’s letters have to offer us today.

“The beauty of it really is that people don’t write wonderful letters now — a letter that has pen and ink and news and sentiment. They just send a little emoji, you know, on their texts on their mobile phones. It’s not quite as eloquent.”

With a seated capacity of around 227, Simon says that tickets for the show have been “selling quite well”, adding: “If they sell too well, we’ll just have to do the show again some time. We might do it as part of the Henley Literary Festival — or we might do it in The Studio at the Kenton.”

“THERE is a fair amount of quiet din, going on in the distance. I think they must be rumbling up the tanks.

“I saw a mass of these monsters parked along the woods near Joyce Grove. One, roughly the size of the Albert Hall was rather charmingly named Cupid.

“I don’t know why I tell you all about this imitation battle when you know all too much about real ones but at the moment it impinges on our life and it makes a change when walking to the village to see tanks instead of squirrels.

“I really prefer squirrels but I can visualise a moment when I’d rather see a Cupid.”