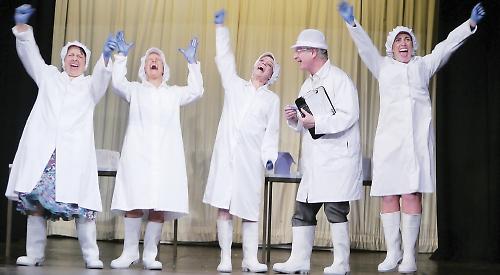 BACK in 2005, Royal Ascot was held in York. In Amanda Whittington’s play Ladies’ Day, this gives four women working in a fish factory the opportunity to leave behind their drab daily lives and to enjoy the adventure of a day at the races.

Staged by Wargrave Theatre Workshop, this was a fast-moving and highly entertaining production, which left the audience helpless with laughter at times. Much credit for this must go to the director, Ann Roberts.

Early on, in a nice coup de theatre, the music changes to “The Stripper” and the women at their factory benches slide out of their work attire to reveal their best Ladies’ Day outfits.

And, of course, they don their superb hats. The drapes are drawn aside to reveal a splendid backdrop (expertly executed by Sheila Williams and Martin Lorenz).

Suddenly we are at York Racecourse. Throughout the piece a white handrail moves around the stage, economically indicating different locations around the ground.

The women have turned up ticketless but then, luckily, chance upon four tickets for the enclosure in a discarded handbag.

Taken out of their comfort zone and fuelled in part by champagne, the women find themselves questioning themselves and each other, and considering new options for their lives.

Pearl (Lydia Massey) had initially suggested the day out to her work colleagues as her retirement do — but she has an ulterior motive.

Ostensibly about to spend more time in retirement with her husband in their caravan in Patrington Haven, she has also for several years been having an affair with a man who happens to be a bookie. In recent days, however, he has stood Pearl up, and she goes looking for him at the racecourse.

Jan (Emmajane Hughes) and her husband parted when their daughter, Claire, was four. Now Jan lives for Claire, but what will she do when Claire leaves home for higher education?

Riotously drunk, she reveals to the whole meeting that she has been in love for some time with Joe, the floor manager in the factory.

Shelley (Jo Cole), the brassiest and most direct of the four, nurtures ambitions of becoming a media queen like Katie “Jordan” Price or “Trisha” Goddard.

We learn that she owes £15,000 on credit cards and store cards. She makes herself known to an unscrupulous TV presenter, who vaguely promises to further her new career in the media and eventually offers her £200 if she will have dinner with him back at his hotel.

This leads to one of the funniest lines in the play, when Shelley asks, in a moment of self-awareness, “Do I look like an ’ooker?” Yes, actually, you do, Shelley.

Linda (Jill Sikkens), the youngest of the four, does her best to keep up. However, partly as a result of sticking to Coca-Cola, she manages to move her life impressively forwards.

An avid fan of the singer Tony Christie, strangely she thinks she might meet him at the racecourse if she looks hard enough.

Instead she meets an Irish jockey called Patrick and romance blossoms. At the same time, she resolves to kick her sponging mother out of her house.

The script called for pace, energy and fast cues from these actors, who duly delivered. They embraced their characters with relish, while also revealing their vulnerability and pathos.

They were matched stride for stride by Peter Pearson, the only male actor in the play, who gave us a brilliant tour de force in six roles, including the three mentioned above.

In a touching scene at the end, superbly played by both actors, he appears as the ghost of Pearl’s bookie lover. He gives her closure by explaining that he has died.

David Williams’s subtle lighting plot added atmosphere and the soundtrack made a vital contribution, especially with the reverberating race commentaries which punctuated proceedings.

Linda may be the biggest fan, but the songs of Tony Christie form a motif running through Ladies’ Day.

The four women enter a jackpot, selecting horses for the six races with names based on Tony Christie songs.

On the day the women nearly win the jackpot but fail when Patrick’s horse comes second in the final race. But in a surprising twist they learn the next day that there has been a stewards’ inquiry and Patrick’s horse is now the winner.

Jubilation ensues and the audience can only wonder what they will do with their winnings.

The only downside to this excellent production is that you go home not only with a smile on your face but unable to stop singing “Is This the Way to Amarillo?” to yourself.

This production was presented by arrangement with Nick Hern Books.