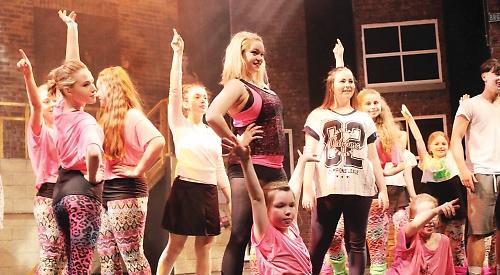 WHEN Alan Parker’s film Fame came out at the dawn of the Eighties, it seemed for a moment as if all life’s problems could be solved with a leotard, wraparound cardigan, legwarmers and pointe shoes — not to mention oodles of talent.

The aspirational kids attempted to dance, sing, recite, compose and play their way to the top — in some cases encountering life’s slippery slopes.

My generation suddenly became aware of the perfectionism required to get in to New York City’s Juilliard performing arts school and the legendary instruction on how you get to Carnegie Hall: “Practice!”

Fast-forward to the present day, where fame is equated with reality TV and pouty posing selfies — okay, and various talent shows — and it was wonderful to see some youthful enthusiasm, hard work and enjoyment on the stage.

This amateur production was a great opportunity to showcase lots of local aspiring actors, singers and dancers, with some strong and clear voices, smart choreography and thoughtful scenes.

The unfortunate synchronicity of adolescence coinciding with the need to make some major life choices was borne out through the exploration of personal issues such as eating disorders, unrequited love, illiteracy and dyslexia and drug addiction.

However, all of this was outshone by the sheer gusto of the piece, as everyone truly sang their hearts out with stamina and style.

There was a great sing-off, featuring a staggered round of singing in three groups, about the comparative benefits of acting, singing and dancing, along with a stalwart and enjoyable musical accompaniment in the background.

We had impassioned teachers trying to do their best by their pupils, arguing that the academic side was just as important as performing.

A few pupils had already stepped on to the sidewalks of fame and were chasing their earlier glory, while others followed in their parents’ famous footsteps (so no pressure there then).

As we followed the class’s journey from auditions through to graduation, with all the incumbent growing pains and struggles, the audience willed them all to find a successful future.

Packed with lots of shining talent, the cast was greatly assisted by a wonderful troupe of talented young children, keeping up with the moves and the words, wearing a kaleidoscope of layered dancewear and clearly having an amazing time.