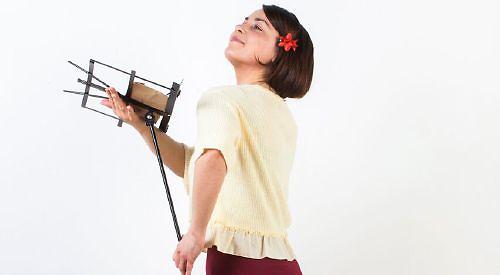 A ONE-WOMAN performance of the acclaimed play Delphine will be staged at the Norden Farm Centre for the Arts next Thursday (April 27).

Clare Rebekah Pointing will take the title role for its debut UK tour before it heads to New York.

Appearing in her own bedroom, we follow this larger-than-life character as she struggles against crippling self-doubt.

On the face of it, the show may appear to be about falling in love, but it’s ultimately about being brave, growing up and moving towards something new.

Q. You’ve mentioned previously that your work is influenced by your own experiences growing up in a single-parent household. How autobiographical is Delphine?

A. It’s not autobiographical but certain moments within the show are heavily influenced by true-life events. The actual story belongs to Delphine, though. I guess I would say that certain personality traits are exploded versions of some of me — at times — but she’s a fictional creation.

Q. One the reviews of the show says Delphine is “reminiscent of Mike Leigh’s most detailed and convincing characters” (which are usually co-created by his actors, as I understand his working method). Alan Bennett’s Talking Heads series of monologues is also mentioned as a possible influence. Are there any influences you would acknowledge in terms of how you went about creating Delphine?

A. I was so flattered that comparisons were made with Mike Leigh and Alan Bennett, I have admired their work for many years and so I think it has probably unintentionally influenced the way I write. I like real human characters, rich with quirks and faults — unlikely heroes from “difficult” backgrounds (no violins intended!)

Q. When did you first start developing the character/writing the play?

A. I started writing the show in October 2015 and finished the writing of it by February 2016. I attended a “writing your own solo show” course, which was for four days across a month, which gave me the deadlines I needed to write and show my idea.

A. I don’t have a method but absolutely love writing. I sit and write every idea in my head (as well as spending a good amount of time just staring at the screen), then once I have a solid chunk I probably only use about 20 per cent.

Q. Is Delphine set in the present day (in terms of technology, etc)? Although she’s still living at home, could she in a way be seen as representative of “Generation Rent”?

A. Delphine does “live” in the present, technically — she has a mobile phone and lives in 2017 — but as an individual she has protected herself from the outside world, removed herself from existing in the modern world. As a form of protection from various simple things in life that challenge Delphine, she has subconsciously lived in the past where she thinks she is safe. The thought of renting would never have crossed her mind, but due to fear of venturing into the new more than anything else.

Q. One of the central events of the play is when “something happens” and Delphine meets someone called Bill, with whom she becomes infatuated. I get the impression the play asks some hard questions about relationships and what people expect to or hope to get out of them. Has your experience of writing Delphine changed how you view the world?

A. The “something happens” within the show is an integral moment, but for me it’s not about this... I did look to make a comment on some hard questions about the people we have relationships with and I’m happy for audiences to take away what they like. However, for me, the importance... another “something happens” is already there with Delphine. It is through this experience that Delphine discovers something she has hidden away from and for me the story is about setting this free, facing her biggest fears and choosing to live with these and move forward.

Q. Can you tell us a bit more about where and when you will be performing Delphine in New York and how the chance to do so came about?

A. Sure. I’m taking Delphine to New York — to the Soho Playhouse — in May. I invited the artistic director of the venue to see my show in Edinburgh last year and after sharing a few exchanges we’ve now booked in some dates and I cannot wait to perform the show there. A new venture and my first trip to America.

Q. You mentioned previously that Delphine is “a drama really but has a comic side”. What would you like audiences to get out of seeing the play?

A. Something I love about theatre — and all art, I suppose — is that each audience member/viewer takes away there own interpretations, thoughts and feelings. If I was to hope for anything, it’s that the audience enjoy the story — hopefully they find it funny in places, maybe touching and hopefully ultimately uplifting.