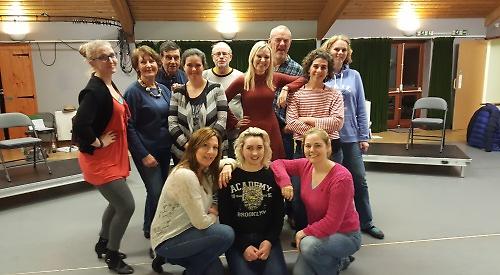 A JOURNEY through some of the biggest musicals will be staged at the Kenton Theatre next week.

Take Me To… is the latest offering from the Henley Amateur Operatic and Dramatic Society and will feature Tony and Olivier award-winning songs and shows from Broadway to the West End.

There will be choice cuts from the likes of Avenue Q, Matilda, Thoroughly Modern Millie, My Fair Lady and Wicked as well as Phantom of the Opera, We Will Rock You and even Monty Python’s Spamalot.

Jennamarie Smith, 28, who chairs the society, has returned to the director’s chair for a third time and has also choreographed the production, which also includes dialogue to hold the show together.

She said: “We went through all the songs and musicals that we liked and there were some we couldn’t get the rights to.

“Working with Jonathan Heard, the musical director, we picked out the songs and what we have is different musical theatre, some old and some really quite up-to-date.

“We also added dialogue which runs through the performance to break it up [the songs] and give it a flow.”

Jennamarie, who lives in Wallingford and works in finance in Reading, has herself appeared in several of the shows that will be featured in the production.

She said: “Having been in some of the shows I have got the feel of the songs. This helped with the choreography in some of the numbers, as well as other movements in the show, which is used to take you through the set. There are some influences from the shows I have been in but the choreography is all of my own design. I have brought in some tap dancing and Cockney dancing.” The cast of 13 will all be wearing evening dress to give the performances a touch of glamour.

Jennamarie, who has previously directed Jekyll and Hyde and The Sound of Music for the society, added: “It is going to be a fun night where you get to see some lovely songs being sung at affordable prices.”