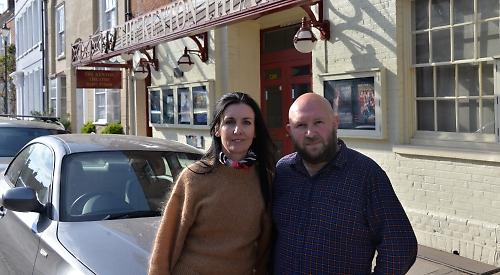 THE Kenton Theatre has appointed two people to replace its outgoing general manager.

She had held the part-time post of general manager since September but announced she would step down in January once a replacement was appointed.

But Mr Ryan, 37, of River Terrace, and Ms Price-Davies, of Bell Street, Henley, pitched the idea of a job share when the role at the theatre in New Street, was advertised.

He began work on Tuesday and says he will continue with his role at the literary festival, which he has held since 2013.

During his time at the festival he has organised a number of events at the Kenton, including readings, poetry performances and talks with speakers such as Brian Blessed, Lynda La Plante, John Sentamu and Katherine Grainger.

Mr Ryan is looking forward to having a “new challenge” and will look to draw on his professional experience.

“I’ve been pleased with the increase in numbers at the literary festival and the variety of acts we’ve put on,” he says. “I’ve programmed events here but also in Reading and London. I’m keen on there being a variety and a range of performers.

“I remember going to the Kenton for the first time to see my sister Harriet perform and now her daughter is performing at the theatre with Muffin Hurst.

“It’s been nice working there with the literary festival and I can’t wait to get more involved with such a prestigious theatre, with it being the fourth oldest working theatre in the country.

“The Kenton did its first comedy night in February and that was a lot of fun. There were a lot of younger people there and I’m keen for that to carry on. It’s not just about big names and I know the community groups are already going great guns.”

Ms Price-Davies has worked in events and arts administration for more than 15 years.

She will continue in her role at the town council on a part-time basis where she is involved in organising events including the annual Christmas Festival and civic functions.

Ms Price-Davies will start at the theatre next week and she sees it as her job to keep it as the hub of the community.

She said: “It is an exciting time to be joining the Kenton and I look forward to working collaboratively with and supporting Tom, the management team and the invaluable team of volunteers on a daily basis.

“We want to ensure that the theatre remains a hub for the widest possible range of the community, whether on stage, front of house or as the audience.

“Me and Tom have worked closely on various town projects in the last couple of years and I think we are a good combination because we bring different skill sets to the role and there is some crossover with our current roles.

“Even though the role was advertised as a general manager, we believe that most other theatres in the country, that are worth their salt, have two separate roles.

“As we are both local residents, and live within walking distance of the theatre, we want there to be more of a presence alongside the volunteers.”

Ms Price-Davies says an important part of her role will be identifying new revenue streams for the Kenton and getting more people using it.

“We are looking at the membership scheme and what we can do with that,” she said. “We want to develop partnerships with the businesses in the town.”

She added: “I’ve already spoken with Martin Unsworth at The Henley College and he wants us to get more young people using the theatre and I know people who want to run salsa classes at the theatre.”

Rick White, chairman of trustees for the theatre, is delighted with the appointments.

He said: “We’re delighted to have Paula and Tom on board. Not only do they both have excellent CVs, they are both Henley residents with strong professional and personal connections to the Kenton.”

l The Kenton is always on the look-out for volunteers. There are positions available for ushers, in front of house, the bar and coffee bar. Anyone interested should email volunteers@kentontheatre.co.uk