The jewel in our crown 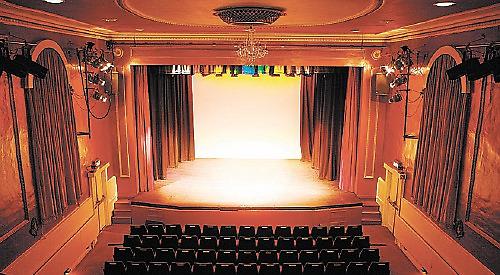 THE Kenton Theatre is a beacon for the arts in Henley, which has attracted stars like Michael McIntyre and Marti Webb while providing constant support for amateur groups.

But just over 50 years ago the New Street venue had only just re-opened after a four-year closure which had threatened to become permanent.

The Oxfordshire fire officer said the New Street building was unsafe and refused to renew the theatre’s licence unless the problems were resolved.

David Tapp, an architect with Maurice Day Associates, was commissioned to design the work.

Most of the modifications took place backstage with the installation of a new fly tower, a rigging system used by the stage crew to move lights, curtains and scenery.

The auditorium was refurbished with 200 seats in a single block and 85 in the gallery and the walls were painted grey to minimise the effect of the rectangular shape.

Nansi Diamond, of Friday Street, Henley, who has been a volunteer and performer at the Kenton since 1960, recalls the refurbishment.

“Backstage was where most of the changes took place,” she says. “It was dangerous back there and we had to climb on ladders to get upstairs.

“It was a dangerous place but the fire officer was always someone we were aware of so we did things with him in mind. We were upset when it closed and thought it was unnecessary.

“But safety was a concern and a number of theatres around Britain had burned down because of candles.”

The Kenton, which is the country’s fourth oldest working theatre, originally opened in November 1805 and was constructed by architect and builder William Parker, of Friday Street.

It stands on land that was gifted to the Corporation of Henley by Robert Kenton following his death in 1632.

Playwright Sampson Penley and theatre owner John Jonas leased the site and the Kenton proved popular until 1813 when it ceased to be used as a theatre.

Over the next century the building was used as a non-conformist chapel, a Church of England school, a beer store and a church hall.

It wasn’t until the Thirties that it was returned to its theatrical roots with travelling repertory companies performing there.

Renamed the New Playhouse in 1939, it continued operating during the war and then afterwards when local amateur dramatic companies staged productions.

Then in 1951 the lease was taken over by artist John Piper, from Fawley, and his friend Allan Hartley. They made many improvements to the building, including installing a proscenium arch, the frame around the stage, and renamed it the Kenton Theatre.

Performances ran regularly until 1963 when it was closed by the fire officer.

Among the volunteers involved with theatre then was teenager Roger Lightfoot whose responsibilities included leading tours of the theatre and helping to drum up donations.

Mr Lightfoot, now 71, and living in Caversham, recalls: “When the fund-raising started I was showing people round and telling them what was going to be ripped down.

“I was in one or two shows that raised money towards it but when the work started there was nothing to do but watch the builders.”

He was appointed stage manager for the opening production, a performance of Frank Hauser’s Amphitryon 38 staged by the Oxford Playhouse.

He helped to put all the new backstage equipment in place and made sure it worked properly.

Mr Lightfoot, who still has a copy of the original programme for the show, says: “I helped put all the ropes up in the new fly-tower, dying the long ones red, the short ones blue and leaving the middle ones uncoloured.

“When it came to the re-opening they needed a stage manager and I did it for the first two or three months.”

Antony Barlow, the theatre manager, wrote to patrons of the new-look building before opening night, saying: “I am sure you will be as thrilled as I am at the transformation that has taken place since it was last open.

“I hope very much that you will justify our belief that there is a need for a theatre in Henley and help to make this a successful venture.”

Before the first performance there was a welcome from Mr Barlow, Lord Rathcreedan and then mayor Dick Hobbs and a tribute was paid to Peter Frankenburg, who had organised the fund-raising appeal.

After the show, there was a party on the stage and the Mayor led a toast to the theatre. Mrs Diamond says: “I don’t remember the evening as anything special but afterwards the theatre was a lot warmer than when I had first performed there!

“I’m a great believer in the arts — I love cinema, live theatre and music, so it’s wonderful to have a performance space and a real theatre. It creates more friendships than you would believe.”

However, while the Kenton was back in business, some of the bills for the work remained outstanding and the theatre’s management company fell into debt.

In 1969, the theatre’s bankers agreed to cancel the overdraft if the Henley Amateur Operatic Society took over the management.

The group, which used the theatre for their performances, accepted the offer and within a year it was solvent.

An executive committee made up of members of the society and other local users was appointed to run the theatre day-to-day.

Mrs Diamond said: “A chap called Pat Matthews, who lived near Conways Bridge, said he would cover 50 per cent of the overdraft if the operatic society took over.

“I was on the committee with a number of other people. I was front of house manager. It was a friendly thing where you rang round everybody and asked if they could help. It was a stressful and busy time.”

The theatre continued to thrive, hosting dozens of shows a year.

There was an expansion in 1982 when Martin Jarvis, a member of HAODS, paid for the theatre to buy the ground floor of neighbouring property, Kenton House.

By 1986 enough money was raised to pay for more improvements with a new bar, coffee bar and box office.

Around this time Wendy Hunter became part of amateur dramatic group the Henley Players and since then has been part of more than 100 shows at the Kenton.

“Everything was amateur then,” she says. “There was a lovely atmosphere and the audience numbers were great. I know there are more professional productions now but some of the amateur productions have been wonderful.”

For the re-opening this time, there was a performance of Three Men in a Boat featuring actor Rodney Bewes, who lives in Hop Gardens.

In 2000 the Kenton Theatre Management Society signed a 45-year lease with the trustees of the Henley Municipal Charities, which owned the building.

This enabled the trustees to seek capital funding for yet more improvements, including a new scene dock and workshop area, a new stage floor, extending the orchestra pit and replacing the stage lanterns.

A decade later the trustees bought the freehold on the historic building after the Henley Municipal Charities agreed to sell its share.

Most off the money was raised by the Kenton for Keeps campaign, which raised £350,000 in six months.

Ed Simons, who was a trustee of the theatre for most of the last decade and served as chairman from 2010 to 2016, oversaw more change.

The theatre started producing its own pantomime and began attracting bigger names, including West End star Marti Webb, who performed her one-woman show Tell Me On A Sunday, and comedian Michael McIntyre, who used the Kenton as a warm-up venue for a national tour and sold out in minutes.

Mr Simons also oversaw the most recent renovation at the historic theatre when the entrance foyer was redesigned in 2015.

He says: “It was an exciting decade in the life of the theatre. It started with the purchase of the freehold by the charitable trust.

“That meant the theatre would be forever in charge of its own destiny. It gave it a financial stability that it had lacked it previous years.

“It had lived somewhat hand to mouth at the largess of the volunteers who supported it wonderfully during that time but it was a year-to-year existence. The trustees felt the way forward was to raise the money to acquire the freehold and make it more commercial.”

Wendy Bowsher was managing director of the Kenton from 2004 to 2016 and oversaw an increase in audiences from about 10,000 a year to 40,000 and raised about £600,000 for improvements through grants, private donations and events.

But she agrees the biggest achievement was buying the freehold.

Mrs Bowsher, who first volunteered at the theatre in 1983 when she was a 15-year-old pupil at Gillotts School, says: “It means there is a balance in the programme between professional shows and the amateur groups from the community.

“The reason I stuck around for so long, and worked so hard, was the work with the community. So many people from so many walks of life have given so much to the theatre and kept it going. That is often forgotten.”

Mr Simons believes that, like many things in Henley, the Kenton punches above its weight.

He says: “The town has a theatre that can stand alone without a penny of government, local government or arts council grants.

“It stands on its own corner and provides wonderful entertainment, at affordable prices, for the community.”