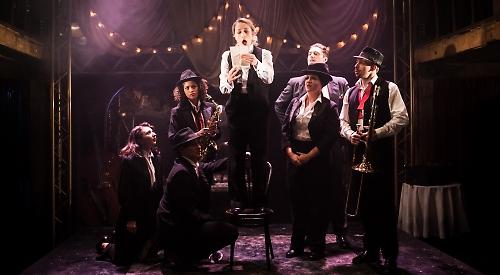 FROM the moment you enter the auditorium of the Watermill Theatre for its current production of Shakespeare’s Twelfth Night you know you are in for something spectacular.

The set that greets you is the interior of a jazz club in the Twenties, artfully decked out with plush and mirrors that set the scene perfectly for the lavish production to come.

The Watermill, celebrating its 50th anniversary this year, has a long tradition of staging excellent plays on its impossibly small stage that make full use of the actor/musicians for which it is famous.

And this production’s musical arrangements and direction by Ned Rudkins-Stow truly excel, making full use of both familiar and newly composed melodies that bounce the production along in exceptional style.

Most people are aware of the plot of Twelfth Night, as it is possibly one of the world’s best known romantic comedies.

It’s a tale of love, mistaken identity, unrequited love, and pranks which result in some of the best comic scenes ever written — involving one of the best-known of comic characters, Malvolio.

This is Shakespeare as you have never quite seen it before, and you get the impression the Bard himself would have loved the way the music is woven through the plot — and surely would have introduced it himself had the talents of this particular cast been available to him. Yes, you do have to suspend belief through the impossibility of a Twenties character being asked to wear cross-gartered yellow stockings, but this is cross-gartering in a totally new dimension.

In gentle contrast, Rebecca Lee’s Viola was truly endearing and totally charmed her audience throughout.

But it is neither possible nor desirable to single out particular members of the cast as the whole ensemble played, acted, sang and danced its way through this fresh new take on Shakespeare’s classic impeccably and gave us a wonderful evening’s entertainment.

The hackneyed old expression “not to be missed” really applies here. The integrity of being true to Shakespeare’s text was successful, and yet the modern twist — and particularly the music — enabled the entertainment value that Shakespeare intended to be accessible to a 21st century audience in a truly remarkable way.

Even audience participation was added to the fray, to everyone’s delight and amusement.

Director Paul Hart appears to have introduced himself as artistic director of the Watermill quite gently, having had significant involvement with the venue in the past, yet with this production he has burst onto the scene afresh in a most impressive and totally successful way.