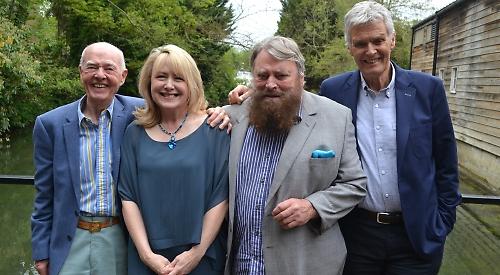 THE Mill at Sonning is to undergo a £1million refurbishment.

The news was revealed at the theatre’s new season launch party on Friday by managing director and artistic director Sally Hughes.

She said the riverside venue’s restaurant would be revamped by sandblasting beams to expose its original features, the entrance canopy would be modernised and a new sound and lighting system installed.

The work will be made possible with the conversion of part of the building into five flats for which it has applied for planning permission.

The third floor of the theatre, which currently houses offices, toilets and storage space, will be converted into two two-bedroom flats while storage space on the fourth floor will become a three-bedroom flat.

The building is currently used as a rehearsal space and overnight accommodation for members of visiting theatre companies.

Mrs Hughes said: “We will rent them out and basically raise a mortgage on these which will raise the money to be able to refurbish The Mill. The restaurant will be made to look like the bar. You will be able to see the water wheel.”

She said the current lighting and sound system was 35 years old and needed replacing and this work would start in September.

“It’s shoring up the fact the theatre’s going to be here,” she said. “I’m so excited, I can’t wait to start. It’s already a beautiful place but it will be even more beautiful.”

The theatre will not close during the work. Mrs Hughes said: “Once we get the permission we then have to sit down and do a whole schedule. I think we would like it all finished by summer next year. The theatre was started by my mother and father Tim and Eileen. They left a great legacy for all of us semi-youngsters!”

She unveiled the shows for the theatre’s coming season to more than 100 guests at the launch in the Waterwheel Bar.

She said: “I’d like to thank all of you for your continuing support. It’s a really exciting year ahead.” The guests included playwright Ray Cooney and actors Simon Williams, who is the president of the theatre’s friends group, and Brian Blessed.

Blessed, who performed his one-man show at the Mill in January and will return in July to direct Agatha Christie’s Spider’s Web, said: “When I first saw the Mill I said ‘this is Shangri-La’. I think it’s magical.

“There are wonderful audiences and a wonderful team here. When the curtain goes up the sets are absolutely bloody marvellous. I think Sally is an an angel from heaven and it’s a miracle what she has pulled off here.”

Blessed said he was looking forward bringing Christie’s work to The Mill and revealed that in 1956 he collected props to build sets when she staged the play at Nottingham Rep.

“If she was here now she’d would be collecting props for me because I want suits of armour in this,” he said. “She would have been going to get the best suit of armour ever!”

The theatre, an old flour mill, was bought in 1978 by Tim and Eileen Richards and opened four years later after a refurbishment.

Mr Richards ran the theatre until his death in 2002 and was succeeded as managing director by his daughter. It now has a restaurant, bar and workshops and employs more than 100 staff.