Revisiting the pressures, terrors and truths of wartime Guernsey 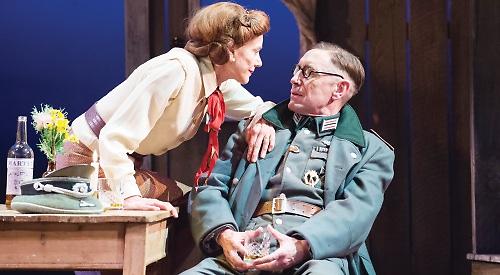 IT is 1943 in Nazi-occupied Guernsey and with most of the men sent to war the island is in a state of unease and shock.

Widow and matriarch Jeanne Becquet (a sublime Belinda Lang) is trying to steer her household along the best course in this dire set of circumstances, simply in order to survive.

Comprising Jeanne’s young daughter Estelle, daughter-in-law Lily and housekeeper Mrs Lake and relegated to a rickety farmhouse after their fine estate has been requisitioned, everyone has their own way of coping — from pragmatic black market dealings to spirituality and wishes by candlelight.

Jeanne’s son — Lily’s husband Miles — had joined the RAF but is missing presumed dead, and his absence is keenly felt.

As a means to get by, Jeanne had entertained the previous incumbent German officer. When his replacement Major Von Pfunz (an excellently Germanic Paul McGann) arrives, she treats us to a darkly comedic, intricate and detailed monologue which is a fantastic plot exposition device packed with caustic wit and scything putdowns.

Meanwhile, Lily, who we find out is Jewish, has discovered a mysterious semi-conscious, injured naked man on the beach and she and Estelle set out to save him, right under Von Pfunz’s nose.

On top of these woes, it seems Estelle is taunting Von Pfunz, tinkering with his possessions including his precious book.

Christening the man they have found “Gabriel”, his origins remain a mystery. Fluent in both English and German and suffering from amnesia, is Gabriel an angel sent from heaven or does he have a darker purpose?

With a perfectly placed bleak backdrop of a cloudy grey sky reflecting circadian rhythms and coastal weather changes, a moving soundtrack and harrowing wartime noises in the background, the claustrophobic make-do-and-mend existence in this surreal chapter of the island’s history was captured in the powerful acting and the rickety farmhouse. As Estelle, Lily and Jeanne search for some semblance of meaning, reassurance and perhaps a resurrection of Miles in the form of Gabriel, Von Pfunz seems to have found space to compose poetry around the activities of the authoritarian Nazi regime.

As his motives become clearer, the females of the piece, directed by Kate McGregor and written by Moira Buffini, at turns reveal their frailties and fears, before keeping calm and carrying on.

With the knowledge that this was based on a real and devastating chapter in history, the audience was drawn in by this gripping, thought-provoking piece showing the fearlessness of the women when faced with sheer horror.