Bernard's back and more farcical than ever 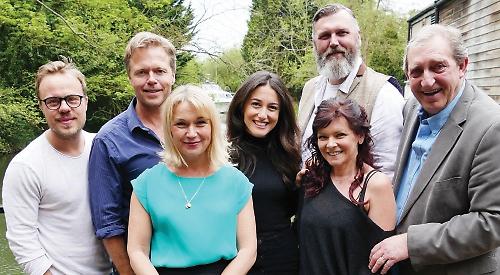 THE cast of the Mill at Sonning’s latest production are busy rehearsing ahead of the show’s opening night on Thursday (May 11).

Don’t Dress for Dinner is the hilarious follow-up to Marc Camoletti’s hit comedy Boeing Boeing, which was staged at the Sonning Eye venue in 2015.

With his wife out of town, an alibi from his best friend Robert and Suzette — a Cordon Bleu cook — lined up to prepare gourmet delights, Bernard thinks he’s planned the perfect romantic weekend for his glamorous French mistress Suzanne. But when Bernard’s wife Jacqueline hears the news that her secret lover Robert is visiting for the weekend, she decides to stick around for a surprise tryst of her own.

An evening of hilarious confusion ensues as Bernard improvises at breakneck speed. Suzanne becomes the cook, Suzette becomes the lover, the wife becomes increasingly suspicious and the friend is completely bewildered.

Adapted by Robin Hawdon, Don’t Dress for Dinner has all the hallmarks of a classic French farce. For tickets and times, call the box office on 0118 969 8000 or visit www.millatsonning.com