Nurse, the screams! Author and playwright shapes a nightmare 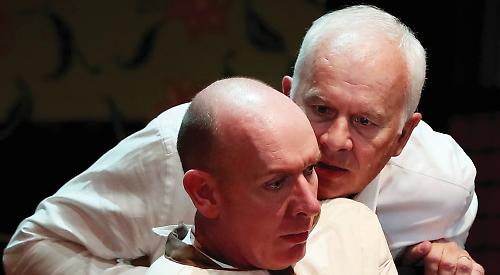 TRUE crime writer Mark Styler has a lot on his plate.

Having been granted rare access to Fairfields, an experimental hospital for the criminally insane, in deepest Suffolk, he intends to interview notorious serial killer Easterman, but to get to him he must first meet with the hospital’s director, Dr Alex Farquhar.

Having been kept waiting for several hours, he explores his surroundings in the director’s office.

Several key props are spotlighted, including a display of a human skeleton hanging from a frame, while later it transpires that alongside the skeleton there’s a straitjacket in the closet, which seems a little archaic.

At one point we see that a lighter is chained to a desk for safety, while the beautifully landscaped garden visible from the window is clearly designed to create a sense of tranquility for hospital residents.

So far, all seems serene, yet there appears to be some odd shapeshifting going on in the scenery. Does this represent some element of the human psyche?

When he arrives, Dr Farquhar does not seem keen to impart any information to Styler, and when Nurse Paisley enters the room she is pretty fraught and distressed. Styler seems to have a close connection with Easterman, while Dr Farquhar appears to be a bit of a closed book. As Paisley and Farquhar seemed to be doing their utmost to encourage Styler to leave the hospital urgently, we became enthralled.

What secrets could possibly be spilled, and why does the only food available seem to be a liver sandwich?

The dialogue between Styler and Farquhar bounced around — one minute comic and acerbic, the next tense and unnerving.

The two men discussed the horrific events of Easterman’s crimes, the nature of evil and what drove Styler to write about true crime and psychopaths.

However what started as a nice bit of verbal swordplay seemed to take a different turn and we started to get to the bottom of just why Nurse Paisley was so scared.

With scalpel-sharp witticisms and an exploration of the darker side of humanity, Horowitz has crafted a psychological nightmare.