Multi-talented young actors are being stretched in all directions 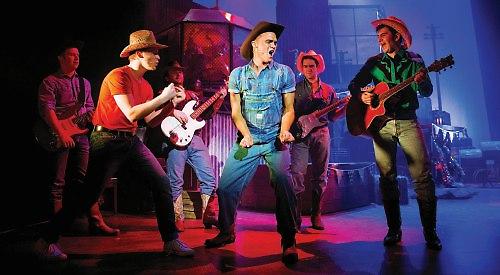 AN Eighties classic, Footloose was one of the better teenager-against-hard-faced-authority films.

It had great characters, a good story and a soundtrack which transcended its time.

So of course someone would want to wring yet more money out of it by turning it into a musical.

It’s about dance as an expression of youthful freedom and follows other films like Dirty Dancing, Saturday Night Fever and even Summer Holiday. Sometimes these musicals can be even better than the film.

Footloose at The Wycombe Swan is a perfectly acceptable show with lots of energy and an abundance of talent — the Pop Idol runner-up Gareth Gates headlines.

Its publicity says you’ll finish the night thinking you can change the world.

Nope, I just felt like a cup of tea and listening to The World Tonight as we drove home.

Make no mistake, the individual parts of this show and the cast are all good to excellent, but Footloose never seems to rise above the sum of those parts to make it memorable.

It gets off to a sluggish start with the title song. It should be a dynamic steamroller of a tune as per the Kenny Loggins original, but the sound balance and an unfortunate screechiness from the three female singers meant we couldn’t quite make it out.

Here we have to think about the talents and capabilities of modern training for musical theatre. There was a time when performers just needed to sing and act. Now they must be able to play an instrument — sometimes more than one — and dance to professional standard as well.

This ensemble cast employs all of these skills and reduces the participants from an orchestra, dance troupe and cast of maybe more than 50 to 15.

So as we watch them perform an athletic and breathless dance routine we wonder how they can control their lungs at the same time to play the saxophones held to their lips.

The main guitarist and bass player — both decent actors as well — managed their frets by playing on the beat, thus co-ordinating feet and fingers.

That said, special mention must be made of Connor Going as Chuck, the requisite teenage baddie — drinking, smoking, high school drop-out bully.

Oh to have been a fly on the wall at the casting sessions when he was told he needed to act all of those things and then slip into one of the keyboard positions to tinkle out a Haydn sonata.

Gareth Gates acquits himself well and his voice was certainly the best — well controlled, expressive and committed.

But the star of the show is the central character, Joshua Dowen’s Ren, a young man taken from his hip urban life in Chicago to try to make a life with his mother in Hicksville, Oklahoma.

It’s his role to turn around this Bible Belt emotionally choked town.

His dancing is from the top drawer — and he does it all himself, unlike Kevin Bacon in the original film. He sings well and is a convincing actor. Perhaps he’s a makeweight on acoustic guitar, but three out of four ain’t bad.