All the world's a stage for drama festival winners 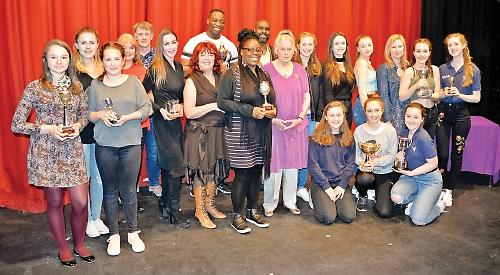 THE director of the Henley Drama Festival says she feels that 46 years on from its founding the event continues to go from strength to strength.

Ann Dayton was speaking following the conclusion of this year’s festival — which ran from Tuesday, May 2, to Saturday, May 6, at the Kenton Theatre in New Street.

As was the case last year, the final night of the festival took the form of a gala evening at which the winners were announced and two of the plays from the festival performed again.

A full list of the winners across four categories — plus nine special awards — was published in last week’s Henley Standard.

With this year’s festival having seen 13 one-act plays entered — up from 11 last year — there was plenty of competition, but the play with the most awards this year was Bethlehem Lights by Michael Ashton.

Produced by the Henley Amateur Operatic and Dramatic Society (HAODS), the play won the Kenton Drama Award in the open category, with Mr Ashton taking home a separate award for best original play.

Unsurprisingly, Bethlehem Lights was one of the plays performed for a second time at the gala evening.

The other was The Cagebirds, produced by The Young Theatre, which won three awards across the four categories contested this year.

This year’s drama adjudicator, Julie McLoughlin from Jersey, also named The Cagebirds her pick of the festival.

Hailing the quality of this year’s entries, Ann Dayton said: “We had comedy, tragedy, and one play, Bethlehem Lights, that was very intense — very strong and
soul-searching — being based on the tribal conflicts in Africa.

“One big asset this year was the fact we had two young men from The Henley College, Adam Brown and Matthew Case. They took to the technicals like ducks to water.

“It was uplifting to see two young men so keen and committed — they have said they want to come back next year.”

Reflecting on the length of time the festival has been running, she added: “I can’t believe we have been going for 46 years. The festival covers all kinds of theatre and I wish people realised what value for money it is — three one-act plays a night and four on the Wednesday.

“We need bigger audiences — they don’t know what they are missing. I have been personally involved since the festival’s inception and I feel we go from strength to strength.”

One festival entrant who was left empty-handed this time around was Henley Standard drama critic Mike Rowbottom, whose play Sixty-Love was the Sinodun Players’ entry.

Together with a number of the other Henley entries, Sixty-Love will next be performed at the Oxfordshire Drama Network’s ODN Drama Festival at the Unicorn Theatre in Abingdon, which runs from Monday, June 5, to Saturday, June 10.

Mr Rowbottom confirmed that his play will be performed at the festival on the evening of Wednesday, June 7, and again at a garden party fundraiser on Saturday, June 17 — full details of which are set to be announced shortly.

He said: “I originally did Sixty-Love with the Henley Players in 2008 and we put it on at the Golden Ball in Lower Asssendon for dinner theatre in a marquee in the garden. It was very successful.”

For more information on the ODN Drama Festival, visit www.oxfordshiredramanetwork.org