Actress playing the cook is the extra ingredient in French farce 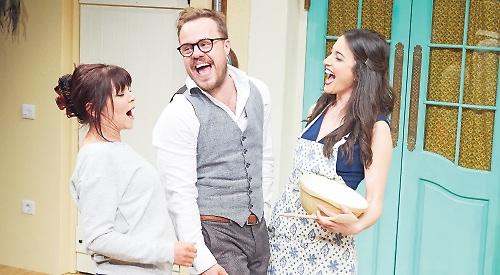 Don’t Dress for Dinner | Mill at Sonning | Thursday, May 10

YOU have to love the French — adultery is the unwritten part of their constitution, unhindered by moral issues, entirely accepted, governed only by its expense.

Robin Hawdon’s adaptation of Marc Camoletti’s Don’t Dress for Dinner makes sure this Gallic tradition doesn’t flag and Ron Aldridge’s skilful use of the Mill’s stage keeps up a breakneck speed.

The story: man plots a dirty weekend with his mistress while his wife is planning the same with her husband’s best friend. Both plans are thwarted at the beginning of the play and the next two hours is a series of misunderstandings, very singular double entendres and mistaken or mis-allocated identity and they each try to hide it from the other.

So far, so farcical and this show is right up there with the Mill’s very high standards.

But there’s an extra ingredient here on top of a well-chosen cast who give their all and leak buckets of perspiration in the process.

We last saw her at the Mill last year as Elvira in Blithe Spirit, when she stole the show.

She does the same here as a mouthy cook who is by turns dowdy, common, sexy, alluring and always appealing. The very best thing about her is her timing — it’s exquisite, with just the right amount of duration and weight given to every syllable to make it work at its best for her. That cannot be taught, it comes from within.

She is magnificent as the cook determined to cash in on her employers’ embarrassment.

Special mention also for Amber Edlin as the disloyal wife. She’s a stunner, raising the question of why on earth her husband, played by Nick Waring, would want to stray.

But this is a French adaptation, so of course he does — he’d be abusing the constitution if he didn’t. His best friend, Rikki Lawton’s Robert, dominates his scenes with his energy and controlled abandon.

Camoletti also wrote Boeing Boeing, which the Mill staged a couple of years ago, and it obviously suits the theatre and its audience.

We live in different times and the French idea of morality, or lack of it, fits our time much better than it might have done in previous decades.

This production of Don’t Dress for Dinner revels in that naughtiness and so do we.