There's too much of this musical 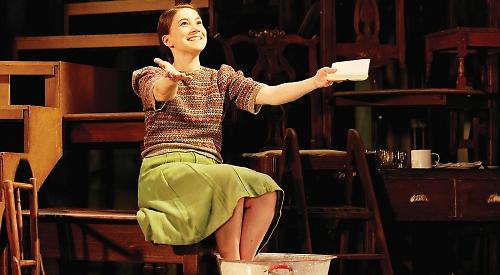 I Capture the Castle | Oxford Playhouse | Tuesday, May 16

SHORT verdict on I Capture the Castle: lose 30 minutes and cut a third of the songs. At the moment there’s too much of this musical.

It’s obvious that everyone involved in it has delivered their all — actors, director, choreographer, musicians, writer and composer. It’s two hours and 10 minutes of continuous action, songs and movement.

Answer: nothing when the songs are good and the movement is exciting. Sadly neither is the case with I Capture the Castle.

The songs are unremarkable and sprinkled — no, poured — into the narrative whether they’re needed or not. The result is saturation.

Any excuse is used to hang a song from a passing line — even a throwaway remark such as looking forward to having peach-coloured towels is given a two-minute musical tribute which puts us back exactly where we were before the piano struck up.

No purpose was served by it and it weakened the original line.

The book is interesting when allowed to develop without interruption, and the play aspect of this show is well done — although the stylistic nature of the movement has a way of slowing rather than speeding up the pace.

But it’s the constant and often unnecessary barrage of music which gets in the way and had us looking at our watches.

That combines with a set comprising two jumbled towers of wooden chairs, probably signifying creative chaos, and a grand staircase of wooden steps — it stays there permanently, when even some variation would have helped give more to the slow pace.

We get off to a promising start with two sisters and their stepmother doing household chores in a rented ruin of a castle with no electricity or running water.

They dream of a better life but have a contentment about them.

The opening a song is lively, with three female voices blending perfectly in harmony.

But that’s all — it doesn’t happen again, and nearly every song after that is a solo, mostly sung by the very talented Lowrie Izzard playing the lead, Cassandra.

You can see what’s happened: the writers have sought to drag every bit of meaning out of every letter in the narrative.

It’s an adaptation of the Thirties novel by Dodie Smith and few details are spared.

But you have to be brutal when adapting a book to the stage if it’s to work. Just look at Victor Hugo’s Les Misérables or TV’s adaptation last year of Tolstoy’s War and Peace.

Something, quite a lot in fact, has to go.