There's nun better than this top drawer cast of actor-musicians 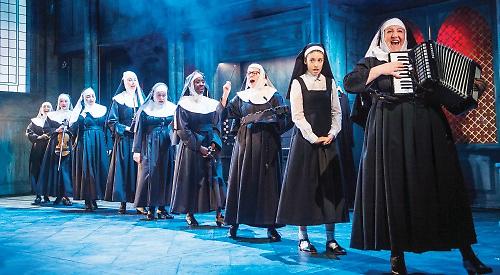 IT’S obvious that Oxford audiences love a good musical, as demonstrated by the standing ovation for Sister Act, which has been playing at the New Theatre as part of its national tour.

The stars were out in force for this production, which is directed by Craig Revel Horwood and stars Alexandra Burke of X Factor fame.

It’s a toe-tapping musical comedy with enough plot to keep the show bouncing along in fine style.

Singer Deloris Van Cartier (Burke) is dating a gangster and witnesses him murdering one of his gang.

For her protection the police hide her in a convent, but the convent is failing as no one attends the church services there, with the result that the church hierarchy are threatening to close it down. To add to their problems the nuns are rotten singers, which puts the congregations off. This does, however, indicate an obvious vacancy for a singing teacher, and so the plot is laid.

The show opens with a recording of Craig Revel Horwood’s voice telling us that the music is all live, played by the actor-musicians of the cast.

And this is what makes this particular production stand out. The live music is superb, and they have managed to gather together all the top-flight actor-musicians in the business.

Karen Mann plays the Mother Superior to perfection in an outstanding performance, only producing her trumpet to comic effect at the end of the show.

Meanwhile, Susannah Van Den Berg, who excels on the saxophone clarinet and accordion, is hilariously funny as Sister Mark Patrick.

But it is almost unfair to single out specific performances. The whole company sings, dances and plays its heart out to stunning effect, giving an evening of pure enjoyment.

Needless to say, this happy show has a very satisfactory boy-gets-girl ending, and the upbeat music brought the audience to its feet in rapturous applause, which must surely have been gratifying for this hard-working and extremely talented cast.