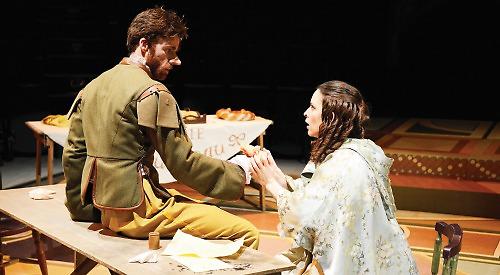 WHATEVER you do, don’t talk about Cyrano’s nose.

It may be a massive conk announcing his presence half an hour before he arrives, but he’s very sensitive about it — you might find yourself cleaved in two because he’s also a magnificent swordsman.

Swordsman has a coarser meaning as well, but it’s his skill with the sabre that’s meant here — his skill in the other department we hear never gets tested because of that nose.

Northern Broadsides’ Cyrano is a delight from beginning to end and the two and three-quarter hours passes quickly.

It’s a new translation, bringing the language up to date with some alarming but funny couplets and plenty of action, fighting, carousing, loving and fun.

It deserves to be seen by a far bigger audience than the barely one-third full Playhouse on opening night.

Cyrano is the story of Cyrano de Bergerac, a Gascon cadet of impeccable fighting skill and a matchless poet whose words alone can erase a woman’s resistance.

But he also has a very long nose — really, really long — so long that his “tears have dried before they reach the end of it”. This, he believes, rules him out of any long-term future with a woman, especially the beautiful Roxanne, whom he has adored since childhood.

It’s a cruel notion which has been adapted for stage and screen many times, but this production has a freshness about it.

We laugh both at and with Cyrano as he runs himself down. He is a noble warrior and would be a loyal lover if given the chance.

The play splits into two sections: a first half which is played as French farce with some moments bordering on hilarious, and a more serious but still funny second half when war comes.

Behind all the joking and the cynicism there is a deep morality rumbling along about beauty being skin deep and talent and devotion being far more important — but neither the original writer, Edmond Rostand, nor Northern Broadside’s adapter, Deborah McAndrew, are going to allow us to learn those lessons until we’ve had a lot of laughs and a few tears.

Key performances are Christian Edwards’s Cyrano and Sharon Singh’s Roxanne, who have us wishing for a resolution early on. Both are completely engaging in their roles.

The set is simple — a decorated cloth background which never tires despite remaining unchanged.

This really is a good show and is the sort of thing in this horrible week which might help restore some faith in ourselves.