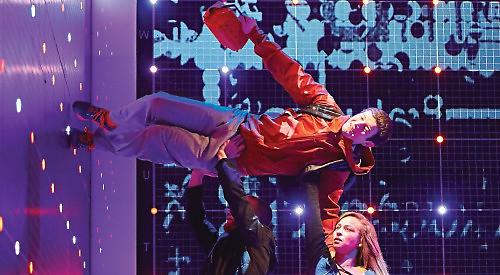 The Curious Incident of the Dog in the Night-Time | New Theatre, Oxford | Monday, May 22

THE very best that modern theatre has to offer — I can’t put it any more clearly than that.

The Curious Incident of the Dog in the Night-Time has all the resources the National Theatre can throw at it and they are used to maximum effect.

This play should not work. Everyone who read Mark Haddon’s book thought so. How could it?

A bleak tale told unemotionally by an autistic teenaged boy does not transfer easily to the stage.

The key word there is “easily” — because it does transfer, believe me, it is an extraordinary achievement.

That is largely down to the director, Marianne Elliott, who combines first-rate acting performances with lighting and video to create this marvellous piece.

But the centre of the play is the character Christopher Boone played magnificently by Scott Reid.

Christopher has Asperger’s syndrome and is trying to solve the riddle of how a dog was killed in his neighbour’s garden.

Christopher can only deal in systems and logic and has no screening methods to help with human discourse.

He is the device through which we learn the whole story. Both the book and play are examples of storytelling in its highest form — all showing, no telling at all.

We are shown the complexities of a marriage gone wrong, the recriminations, the difficulty of loving or trying to love an autistic son, and these aspects are revealed steadily, understandably and clearly.

Elliott and the playwright, Simon Stephens, had some excellently worked material to work on, allowing them to develop the narrative and litter it with dramatic moments.

The use of a video wall and floor are central to the production. They highlight Christopher’s confusion at the same time as illustrating the story.

Frequently coloured dots in even patterns flash up, and we get the idea that is how Christopher sees the world — a series of logical dots which he tries to join up, but he can’t see the colour and the emotion around them.

This could so easily have been a well-meaning fringe show with a didactic message, but it turns out to be universally accessible theatre.

Christopher’s unassailable naïveté, absolute straight-talking, lack of nuance and deception are the tools to show how his family, his teachers and people he encounters strive so hard to hide from life.

Christopher doesn’t have that luxury. We take it for granted as we tell little white lies, pass unmeant compliments, do devious acts and ignore what’s inconvenient or irrelevant.

As Haddon says in his programme notes: “I might say that Curious is not about Christopher at all, it’s about us.”