Boys are back in town for transatlantic musical 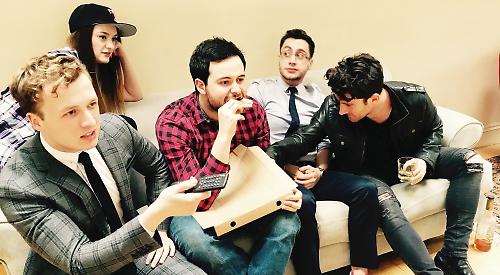 THE cast of Henley’s newest musical are busy rehearsing ahead of the show’s opening night at The Studio in New Street on Wednesday (May 31), writes Matthew Wilson.

As the title suggests, Bromance: The Dudesical is something of a transatlantic production, having been written by two young New Yorkers, Kyle Ewalt and Michael Ian Walker.

The show has previously been performed as a concert but has never been staged as a full musical — until now.

The Henley production is the brainchild of Daisy Smith, who in July 2015 staged a four-night run of the award-winning Broadway musical The Last Five Years at the same venue.

Earlier this year she was thinking about putting on a charity concert in Henley and was browsing online for suitable material to use.

“I wanted to find some funny boy duets because I really couldn’t think of any,” said Daisy.

Searching on YouTube led her to a song called You Get Me that turned out to be one of the numbers from Bromance.

Then, unable to find the sheet music, she decided to email the writers direct — and the rest, as they say, is history, with Daisy’s plans for Bromance extending well beyond its Henley dates.

As reported earlier this year, she is hoping to take the show into London this autumn with a view to a possible Edinburgh Festival run in 2018. “We’re kind of open to opportunities at this stage,” says Daisy. “We’re sort of going to have some people ‘in the know’ from London come out and see it.

“Getting it on its feet in Henley and seeing how it works is key to them taking it on. You want to get the right audience and the right space for it.

“We’re trying to make it quite immersive in Henley. As in, there’s not like the audience and the stage — it’s all very much one space — so the boys will literally walk through the audience. The bar is like the audience’s bar and the boys’ bar — it’s the same bar. So that’s the idea behind it. We’re kind of seeing if that works or whether we need to think differently.”

Set to be performed in the round in the 60-seater venue, which is located right next door to the Kenton Theatre, Bromance follows the comic misadventures of a group of friends who get together one St Patrick’s Day in Chicago.

When Marty, a lonely IT guy who is new in town, meets Tom, Dick and Harry, he desperately wants to be part of their clique. But first he must show he has what it takes to be accepted as one of the “bros”.

The show is being directed by Sarah Redmond, with rehearsals due to move to The Studio itself on Monday.

So far things have been going well and the sense of anticipation is high.

“Me and the cast have been laughing a lot in rehearsals,” says Daisy. “That’s always a good sign that it’s funny!”

Tickets for Bromance: The Dudesical are £20 and can be booked by calling 07983 333757 or emailing info@
howveryproductions.co.uk