Twists, turns and kinks in the road through murder mystery 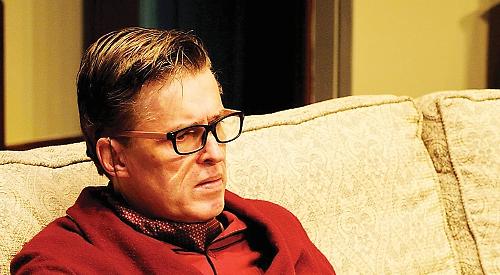 The Sound of Murder | Theatre Royal, Windsor | Wednesday, May 24

THE reliable team at Talking Scarlet bring us a tale of intrigue and suspense with several kinks in the road in this nervy, discomfiting murder mystery.

For a writer of children’s books from which he is making a fortune, Charles Norbury is a nasty piece of work.

The fluffier his characters become, the nastier he seems to get, and while he can write for children, he makes no bones about his disdain for them.

With a house in both town and country, he treats his wife, Anne, like a skivvy and the success of his penmanship has given him an inflated sense of entitlement.

As he has been lording it over the wretched Anne, she has turned to comfort elsewhere in the form of her lover, Peter Marriott.

In the meantime, Charles’s secretary Miss Forbes — who doesn’t have to use a dictaphone, but it helps — also has a thing for Peter, and time is ticking.

Marcus Hutton was superb as the spiky, unpleasant Charles, demanding his miserable wife bring him his whisky and soda in the bath.

Michelle Morris as Miss Forbes was a striking caricature of a single woman on the edge of the shelf, prim and proper in horn-rimmed glasses, who knows her own mind and is not to be underestimated.

As Anne begs for a divorce and we learn just how awful Charles has been to her, Peter tries to persuade her to escape the misery.

However, it is 1960 and there are rigid social constraints in place, not to mention some fabulous, seriously loud decor and curtains ripe for twitching.

With an addictive underlying musical score carrying us along, there were lots of nice touches, including seasoned actor John Hester providing some amusing ad-libbing as Inspector Davidson.

There was a collective “Oooh” from the audience at certain moments and we didn’t know quite which way the plot would turn.

As we learned about their various thwarted and unmet needs and desires, the players tried to become masters of their own fate, little knowing who was really pulling the strings.