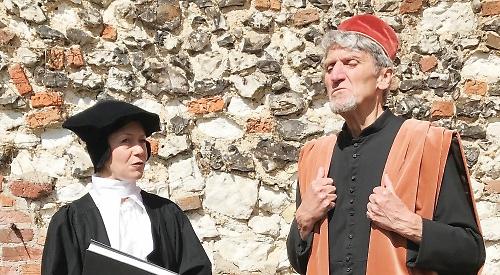 SINCE its first open-air production of A Midsummer Night’s Dream in 1987, Wargrave Theatre Workshop’s “Shakespeare on the Green” has been one of the highlights of the biennial Wargrave Festival.

This year’s production is The Merchant of Venice, which will be staged in traditional Elizabethan costume on Mill Green, off Station Road, from Wednesday (June 7) to Saturday, June 10.

Although listed as a comedy, The Merchant of Venice is regarded as one of Shakespeare’s most troubling plays, with some having viewed the character of Shylock as antisemitic.

A spokesman for Wargrave Theatre Workshop said: “The play is a timely reminder of what happens when a minority are treated as alien when their dress, religion or attitudes do not reflect what is thought to be ‘acceptable’ to the majority. They are often forced to live in ‘ghettos’ and limited in the work, education and benefits available to them.

“The themes of mercy and forgiveness run through the play and, although written at a time when there were few Jews living in England or Venice, this timeless drama makes us question our own attitudes to those who we have been conditioned to believe are ‘not like us’.

“A talented cast has been brought together and are rehearsing enthusiastically to bring to life many well-known characters.

“This will be director Joe Haynes’s tenth Shakespeare production and his aim is always to make his plays both entertaining and accessible without compromising the text. Returning audiences testify to his success.”

When it comes to this production’s interpretation of Shylock, it is worth noting that the moneylender is being played by Mr Haynes.

All performances of The Merchant of Venice are at 8pm and the bar opens at 7.15pm each night.

Wednesday’s performance marks the opening of this year’s festival, which runs until Sunday, June 25. The start of a packed programme sees the open-air theatre at Mill Green host a production of A Spoonful of Sugar from Thursday (June 8) to Saturday, June 10.

Adapted from the Mary Poppins books by PL Travers, this is the amazing story of the Banks family who lived in Cherry Street, London, and a nanny who turns their lives upside down.

A well-loved family favourite, the play is being performed by Wargrave Theatre Workshop’s youth and juniors.

Performance times are 5pm on Thursday and Friday and 2pm and 4pm on the Saturday, with tickets £4.50 for adults and £3 for children.

On Saturday, June 10, at 7.30pm Woodclyffe Hall in the high street is the venue for a folk night featuring Mad Jocks & Englishmen. Tickets are £17.50, including a hot supper.

For full details of the festival programme, visit www.wargravefestival.org.uk