Domestic dramas are a party invitation not to be missed 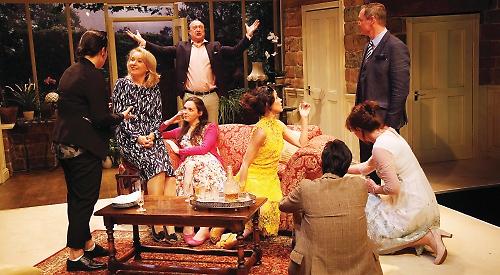 ANYONE who has dabbled in amateur dramatics will be familiar with the nightmare of muddling up lines or missing an entrance.

But the Watermill Theatre, which marks its 50th birthday this year, is celebrating its professionalism by biting the bullet in a big way.

Its current production, Alan Ayckbourn’s House and Garden, is actually two plays that run concurrently — one in the theatre and the other in the garden — with two separate audiences but with the same cast playing the same characters in both plays.

And quite how they manage to pull it off in such a slick and flawless way almost defies belief, and must demand huge effort behind the scenes.

The plays revolve around the household of “county” couple Trish and Teddy (Teresa Banham and Tim Treloar) who are hosting a lunch party for influential friends on the same day that the annual summer fete is due to be held in their garden.

Teddy is expecting an old school chum who has political aspirations for him, so he is desperate for everything to go well.

But unfortunately their marriage is foundering and Trish seems to totally ignore him. Throw into the guest list the French actress who has been engaged to open the fete and her driver, and Teddy’s mistress Joanna (Cate Hamer) and her gullible husband (Robert Mountford), and chaos is almost certain to follow — not helped by the eccentricities of the unreliable staff.

Ayckbourn’s writing lives up to its reputation for joyous comedy and there are several nice little subplots involving Trish and Teddy’s daughter Sally (Grace Cheatle) and the reporter for the local paper.

Not to mention activities in the garden which revolve chiefly round the organiser of the fete Barry (Gareth Kennerley) and his downtrodden wife Lindy (Sally Tatum), for whom the audience clearly had great sympathy as the cracks in their marriage became obvious. To say that the whole thing is a romp is a real understatement.

Director Elizabeth Freestone cracks everything along at a tremendous pace, helped by outstandingly good performances from all the cast.

Although he was supposed to be such a rogue, Tim Treloar’s performance as Teddy was an absolute tour de force as he wrung every ounce of fun and poignancy from his lines.

At the end of Garden his attempts to call his dog — the only friend he had left — were absolutely brilliant.

In addition to superb acting all round, both plays benefit enormously from excellent sound and convincingly atmospheric music by Helen Skiera.

Intriguingly the two plays interlink in a clever and very satisfying way, even though they can and do stand alone as two separate dramas.

Performances are timed so that you can see one as a matinee and the other in the evening, or you can take your pick as to which performance you see and when.

This “double act” is a most unusual and clever concept that really does have to be seen to be believed. And if occasionally someone arrives a little late and out of breath for their curtain call, it only adds to the fun and brings home to you what a skilful undertaking these two Ayckbourn gems are.

Definitely one to be left to the professionals in my opinion!

House and Garden runs until Saturday, July 1. For tickets call the box office on 01635 46044 or visit www.watermill.org.uk