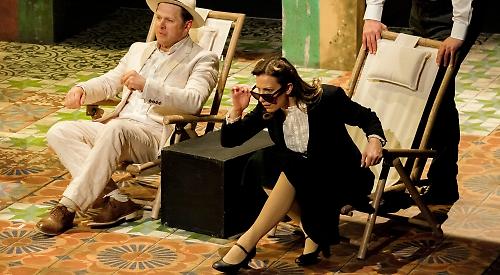 A GREAT spy story has an aura of tension and mystery, a smattering of comedy and most importantly, a team of invisible characters — so invisible they may not, in fact exist, their names borrowed from elsewhere.

In Graham Greene’s farce, hard up vacuum-cleaner salesman Wormold has a young daughter, Milly, with expensive tastes to provide for. Local police chief Segura has half an eye on Milly, but could prove a useful comrade.

Wormold falls into the world of espionage and apparently easy money when he is recruited by Secret Intelligence Service agent Hawthorne and fabricates a list of spies in order to keep up appearances for the London office.

He sends blueprints of his inventions of giant, scaled-up spy machinery, not dissimilar to his vacuum cleaners, in an era of nations being concerned over the secret technology of their rivals.

However, when a real-life namesake is killed, things take a turn for the worse and he finds his life may be in danger, leading to musical chairs, plates and flasks at a trading convention.

Within the setting of a sultry, lively Havana, with colourful grand old hotels and fabulous Latin American music, the team at Creative Cow, who last year brought us Greene’s Travels With My Aunt, again demonstrated their skill in spreading a multitude of roles among a cast of just four, in another picaresque tale.

There were flawless and swift segues from character to character, never missing a beat, and with comic outcomes — for example Milly jumping into character as Wormold’s new secretary, Beatrice, leading to the comment “You remind me a lot of my daughter.”

With this strong framework, James Dinsmore was marvellous as Hawthorne, as Wormold’s acquaintance Dr Hasselbacher, and as assorted bowler-hatted men, Latina ladies and more.

Michael Onslow brought out a highly credible gruff South American in Police Chief Segura, with a filthy laugh and a constant cigar.

There were some hilarious skits, with a quick transformation into a car using just some torches and a window frame, a food-tasting dog, and a man dressed as the Queen.

In a classic spy scene, Wormold persuaded Segura to play draughts with the added proviso that the pieces comprised miniature Scotch and Bourbon bottles, to be downed with each winning move, which we knew would not end well.

A nod to upwards promotion for the useless had me chuckling. With women, drink and guns, all with an underlying Cuban beat, this was hot stuff.