Quirky retirement home pals seize what remains of the day 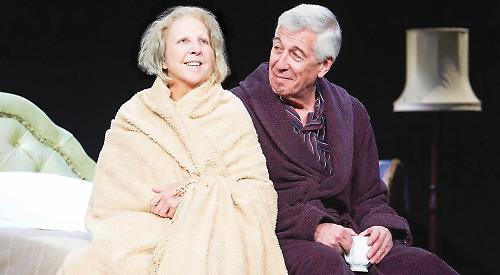 IF ever a line of poetry was elucidated in a comedy, Dylan Thomas’s exhortation to “Rage, rage against the dying of the light” was here embraced with gusto by the cast — to loud guffaws from the stalls.

This no-holds-barred look at a life-stage declared by Bette Davis to be no place for sissies is an exhortation to grab life with both hands and “carpe” the “diem” out of it.

No-nonsense ballbreaker and retired photojournalist Diana Trent anticipates the arrival of yet another mildly catatonic neighbour at the Bayview Retirement Home.

Instead she is pleasantly surprised when daft old Tom Ballard turns out to be more than a little cheeky. Where Diana is a bitter atheist, Tom likes to go on transcendental travels — from the comfort of his armchair.

As Diana realises Tom is more of a well-meaning “intellectual anarchist”, the troublesome twosome start to shake things up at the home, protesting at the bland menu (such as “roadkill Fridays”) and tussling with hapless manager Harvey Bains and his besotted, dimwitted assistant Jane.

Meanwhile, Diana’s expectant niece Sarah needs a hand as her new husband is doing time. Luckily, Sarah has lent her aunt the keys to her Porsche...

With plenty of wit and one-liners, taking in a vast spectrum of life from bereavement to infertility, infidelity, human fragility and the healing power of love, this also packed in everything from cradle to grave.

As a fan of the original TV series, it was satisfying to enjoy this take on it — a glorious distillation written by the original author Michael Aitkens and starring a pitch-perfect pairing of Jeffrey Holland and Nichola McAuliffe.

This was stuffed full of topical jokes, rude awakenings, some surprising bangs — and the oldies showing the youngsters how it’s done.

Waiting for God is playing at the Theatre Royal until Saturday and will be at the Oxford Playhouse from Tuesday, June 27, to Saturday, July 1.