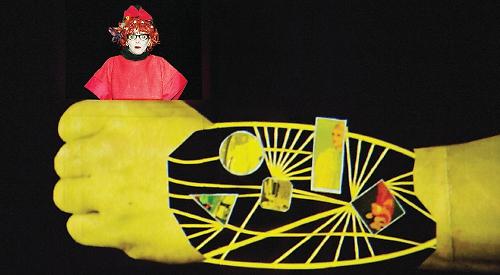 DISJOINTED, anarchic, weird and frequently brilliant: Golem is an exhilarating assault on the eyes and ears.

This relentlessly inventive piece is a coming of age for an art form. The blend of colourful film and live performance might be the Sergeant Pepper of theatre.

All of these things have been done before but perhaps not so cohesively — strange to think that disjointedness and anarchy could form cohesion, but that’s art for you.

The story matters here, but it’s the form which is so breathtaking.

We start with a video wall which once fired up never quietens down.

Moving images teem and cascade from it and the five live actors blend into it seamlessly — so much so that sometimes you can’t be sure if you’re watching a film or a live person.

This requires precision of the highest order from the tech-team and the actors.

They never falter — it’s the ultimate in professionalism.

I had to look up golem. It’s a Jewish tradition based around a clay puppet. And that’s how the story starts — almost.

First we are introduced to a live family of beta-types, also-rans, the folk who make up the vast majority of the world.

They work in a stationary office where the height of ambition is to be promoted to supervisor of pencil sharpening. They are content in this limited world.

Then Golem is introduced — first as a robotic clay puppet utterly subservient to the humans around it.

The beta-people go about their daily lives but they are made slightly easier with Golem doing the drudge work.

Think of a Fifties environment when vacuum cleaners, toasters, and cars became available to take the load off.

Things become more sinister with the arrival of Golem 2 — an upgraded clay model now able to do a great deal more and almost on equal terms with the people it serves.

But they acquiesce because life has become immeasurably easier — think of Windows 95 and its subsequent developments.

Finally we get Golem 3 — an all-encompassing presence governing communications, lifestyle, production, entertainment, everything!

This is a political polemic masking as entertainment and the message comes home hard: robots will do everything in future decades and what will we be left with?

And all because we let in a clay puppet — or a toaster — a few decades ago.

Fascinating stuff and full marks to the creator, Suzanne Andrade.