This spooky, stormy Heathcliff doesn't beat about the bush 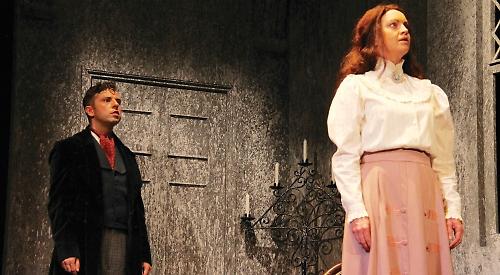 WITH this harrowing story of vengeance, passion and wrath, a telenovela for its time, we were plunged straight into the gloom of a dark, inclement night, in the grand house by the name of Wuthering Heights, overlooking the Yorkshire moors.

Visitor Mr Lockwood spends a night in a mysterious room and suffers a dreadful nightmare, before retreating to neighbouring Thrushcross Grange, where he is staying.

Servant Nelly Dean relays to him the terrible events of the house’s recent past.

Then we meet the protagonists, Catherine Earnshaw and foundling Heathcliff, and learn of their intense bond formed in childhood.

Part ghost story, part disastrous denial of love, the two seem destined to be together and Cathy tries to mastermind a secure future - by marrying Edgar Linton to improve her status.

This leads to conflicting behaviour in Catherine, between her more socially mobile desires and her feral, base emotions.

When Heathcliff eavesdrops and hears the worst but not the best proclamations of Catherine’s love for him, their fate is sealed.

The voice of reason throughout, servant Nelly Dean, played with great skill and stamina by Emily Outred, tries to keep an even keel when all around her are railing at each other.

Her subtle hints as to the best way to behave go unheeded and she can merely watch and try to comfort as events unravel and each person becomes more constricted by the others’ treatment and, in Catherine’s case, self-destruction.

Everyone involved played out their highly emotional characters to the full, which was discomfiting and powerful.

With the action taking place in the two great houses, the stage was cleverly divided through lighting and styles so that the cast could easily and adeptly switch between the two.

The spooky, stormy atmosphere of the moors was complemented by the blue stone and large windows, lending themselves to the appearance of the odd apparition.

As part of the Windsor Repertory Festival, to turn the stage around so quickly must take some doing, while we were astonished at the ability of the cast to learn and retain so many lines in such a short space of time, which was certainly no mean feat.