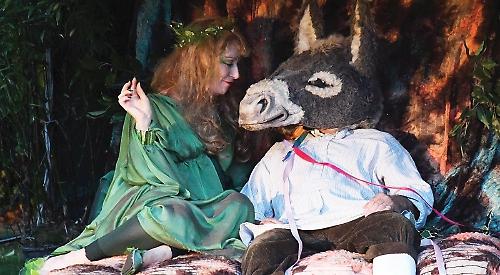 THE marketing tag “Have you seen my Bottom?” set the fun-filled tone of the Garden Players’ production of A Midsummer Night’s Dream.

All that familiar confusion of who loves whom and of Puck dropping love-juice on the wrong eyelids took a refreshingly entertaining turn with this production — and the audience loved it.

Staged in the tranquil gardens of Stubbings House near Maidenhead, this was a superb production.

Director John Timewell extracted every ounce of fun and double entendre from this well-known and much produced Shakespearean script.

Much of the humour lay in the body language of the cast and involved the audience to the full, as a production in Shakespeare’s time would have done.

Particular mentions must go to Gráinne Harling for her queenly yet lusty portrayal of Titania. We truly believed her to be besotted by Bottom in his ass’s head, so convincing was her ear-stroking seduction technique. And to Ryan Witney for his performance as Bottom, ably supported by the rest of his fellow players as they rehearse their play for the Duke’s nuptials.

The scene with tall Wall and short Bottom trying to peek through Wall to communicate with his hysterically funny lover, Thisbe (Graham Weeks), was particularly entertaining — again, largely due to the direction and actions of the cast.

This cast with their able director certainly maximised the script’s fun factor in every way possible — body language, timing, and communication with the audience.

Katie Welland as Helena came into her own as the complications of the play progressed. At first she is somewhat overshadowed by the doubly-loved Hermia but, as the plot thickens, Helena shines through and it is she who sets the pace — especially in the catfight between the two young women as the two lovers, Lysander (Harry Petrie) and Demetrius (Alfie Hurst) do their best to keep the sparring girls apart in yet another show of excellent direction and acting.

This was my first encounter with the Garden Players and if this is the standard of their productions I can’t wait to see what’s next.

Nor am I alone. As we left the gardens of Stubbings, several others in the audience were already planning to book for next year’s picnic production.

It was particularly pleasing to see so many young people — roughly 11-plus to young teens — in the audience.

They all seemed to laugh in the right places, so this highly accessible and enjoyable production of may well have sprinkled some of Shakespeare’s fairy dust on their young eyelids, too.