'Men are welcome... at their own risqué!' 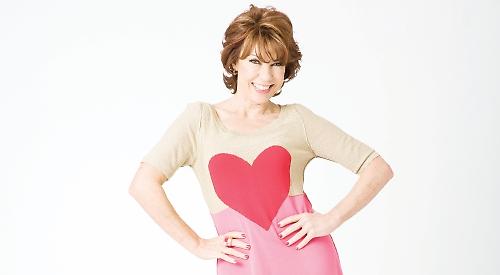 The Australian-born, London-based author of bestselling novels such as How to Kill Your Husband (and Other Handy Household Hints), Foetal Attraction, and Nip ’n’ Tuck, scriptwriter, commentator, party girl and all-round bonne vivante is promising “fun and frivolity but with feminism sewn through”.

And while Girls’ Night Out is defiantly not a tirade against the male species, Kathy insists that they really do have to up their game a bit to force through true equality in society.

“Men need to help us — they need to come to the barricades now. Things will only finally change when men think ‘I did not want this for my daughter.’

“The show is a feminist rallying cry that we’re all in this together. But it’s not dogmatic — I’m being funny with it.

“Scientists tells us that laughter is innate and comes from the oldest part of the brain. Biologists tell us that laughing is really good for your health.

“Anthropologists tells us that all around the world, in every culture, women laugh more than men especially in all-female groups.

“It’s a real male myth that women aren’t funny. When you’re out on a girls’ night out, you often have to be hospitalised from the hilarity.

“I think a lot of men are just terrified about what we’re being funny about. They think we spend the entire time talking about the length of their members, which is not true, as we also talk about the width, which, after childbirth is so much more important.”

While Lette is offering the warmest of welcomes to any men who wish to attend her Girls’ Night Out, she feels compelled to add one proviso.

“We’ll warn the men at my shows that there’ll be a man-sacrifice at the end of the evening: one of them will be stripped naked and covered in whipped cream to be licked off slowly. So long as they know that...”

A man might well be served up as dessert, but for the show’s main course Kathy has a lot to get off her chest as she reflects on her own life, the books she has written — including Mad Cows and Puberty Blues, which both made it on to the big screen — and the misogynistic hypocrisy that underpins much of western society.

“Women are getting concussion from constantly hitting our heads against the glass ceiling, and we’re supposed to clean it while we’re up there.

“I’ll talk about the areas of life where women are second-class citizens, whether it’s in attitudes to sex where a sexually active man is still seen as a stud or lothario while a woman with the same sexual appetite is a tramp or tart.

“I’ll talk about all the sexism that comes into your life once you have babies, because even though women make up more than 50 per cent of the workforce they’re still doing around 99 per cent of the housework and childcare.

While the mighty sword of satire means that Kathy can be swingeingly funny about such thorny social ills, there is one subject close to her heart that a path to humour has been more difficult to navigate.

Her autistic son Jules is an actor on Holby City, and while his success now is a source of much joy for both Kathy and her husband, the human rights barrister Geoffrey Robertson, his younger life at the hands of cruel schoolyard bullies made all their lives difficult.

“After the interval I’ll do a more serious section. By that time, I’ve stripped off my emotional underwear — the show is a psychological striptease, after all — but then I’ll share with the audience the one thing I haven’t really talked about much, my autistic son.

“I get women to think about their husbands, their fathers, their sons. If they’re trainspotters or planespotters or if they put their records in alphabetical order compulsively or if they’re emotional bonsai and you need to put fertiliser on them to get any feelings out, then there’s a good chance they’re on the autistic spectrum.”

Raising an autistic child to be successful in their chosen field would be anyone’s idea of a fine achievement. Typically, Kathy has other notable feats to add to the list. Such as teaching her learned pal Stephen Fry a word he didn’t know.

“It was ‘misogamist’, which means a hatred of marriage. We had to get the OED down and I was very proud. That’s a career highlight.”

She would also cheerily claim that being a writer-in-residence at the Savoy Hotel is also close to the top of her CV credits.

“I have my own cocktail at the bar — the Kathy Cassis. We put a lot of research into that. I was sitting in the Savoy one night drinking a Kathy Cassis with the author Julian Barnes and said to him that I was really glad to have a cocktail named after me but I was slightly worried about the men who can go around town saying they’ve had me. He said, ‘Don’t worry, Kathy darling — as long as they say you went down rather well.’ For him, that was so risqué.”

Risqué, rude and a little bit raucous — three descriptions you could easily attribute to the talented Ms Lette. Her bawdy nature and love of words have gained her a faithful following that will be out in droves once her Girls’ Night Out tour is up and running.

“The lovely thing about meeting my readers and fans is they’re so witty and warm and welcoming — they bring me amusing anecdotes they’ve been saving up like little conversational doggy bags. We hug and often end up in the bar.

“I do like performing but I never wanted to be an actor — I couldn’t bear putting other people’s words in my mouth. Imagine! Where have those words been? Ugh! I have to write them myself.

“I like to communicate and if I have a gift as a writer, it’s putting into words what women might be thinking but not have the chutzpah to say out loud.”

Kathy Lette’s Girls’ Night Out is playing at Norden Farm Centre for the Arts in Altwood Road, Maidenhead, on Wednesday (July 5).

Girls’ Night Out is also touring to the North Wall Arts Centre in South Parade, Summertown, Oxford, on Friday, July 21. Showtime is 8pm and tickets are £12. To book, call 01865 319450 or visit www.thenorthwall.com.

The show is recommended for ages 16 and upwards. For more information, visit www.kathylette.com