'No sex please' comedy should have been through the Mill 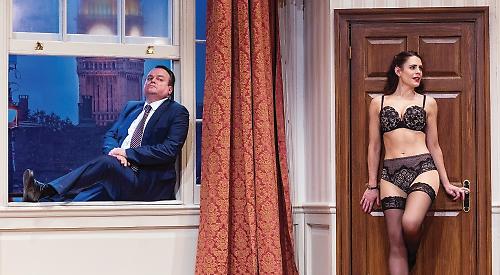 WE’RE in the biggest political tangle in half a century, no one knows what Brexit means, no one seems to have a plan and according to the now ex-chancellor the prime minister is a “dead woman walking”!

Ray Cooney must have jumped for joy when all that lot landed in his lap just as he was reviving his Nineties not-quite-political farce, Out Of Order.

Cue loads of remarks about May and Corbyn and lip service paid to who they are — they certainly caused the New Theatre audience to laugh, although not terribly loudly.

As with all Ray Cooney farces the situation hardly matters.

This time it’s a government minister pretending to his wife that he’s at a crucial Commons debate when actually he’s in a hotel room about to indulge in some extra-parliamentary consultation with a sexy secretary — Jeremy Corbyn’s sexy secretary, apparently.

But there is no real politics in this piece — just sex, or various frustrating attempts to get it. The thing is that no one ever gets any in a Ray Cooney farce, although lots of people wind up with next to no clothes on or around their ankles in compromising positions.

The set is designed to give maximum confusion and evasion: a bedroom door, window, cupboard and entrance, and people disappear in and out of these with bewildering regularity as the government minister, Mr Willey — I know — tries to get out of an ever-deepening series of crises entirely of his own making.

A jealous husband, a bored wife and an angry nurse all add to the churn and the lies and misleading statements get weirder and weirder.

This stuff works when it’s done at breathtaking speed — the way the Mill At Sonning do it, in other words.

It has to be so fast that you don’t have time to think about how silly it is — you get swept along and come out at the other end dizzy and saying “Wow, what a ride.”

Anything even slightly under that pace and the show starts to plod and that’s what happened with this one.

It had quite a few moments of fun and some spirited performances from Sue Holderness as Willey’s wife and Shaun Williamson as a parliamentary aide do their best to keep it running. But it did not run smooth and fast throughout.

When that happens it becomes predictable and the thing with farce is the surprise.

If you know what’s coming then it becomes like a game of bingo as you tick off the ingredients — girl in underwear, husband on the rampage, unexpected wife, outraged hotel manager, misrepresented oral sex. Haven’t things moved on since Brian Rix?

This is still a good night out, but if the Mll had done it then it would have been a lot better night out.