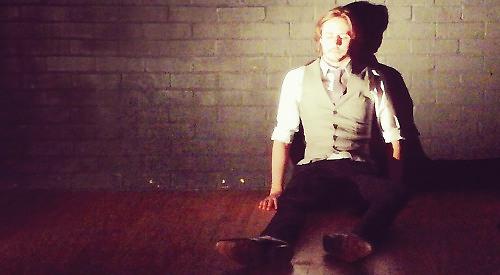 THERE was more than one pair of star-crossed lovers in Romeo and Juliet — who knew? And they come to an equally tragic end.

Is it there in the text? Writer Miriam Higgins thinks so. Mercutio and Tybalt are two glancing characters in the play with very few lines but one important event, a fatal fight, which drives on the main tragedy. But here they are the main event.

It’s as if the playwright had somehow managed to catch Tom Stoppard while sleeping and reached in to the darker side of his imagination to scoop some of it out for herself.

Stoppard started this kind of idea with Rosencrantz and Guildenstern are Dead 50 years ago. Here Miriam Higgins tries it another way — she tracks back from the fight, not forward as Rosencrantz does from Hamlet.

There’s a fight in Verona where Tybalt kills Romeo’s best friend Mercutio. History and the theatre has always been happy to accept that and move on to the vault and the poison and so on.

But that fight is a dramatic event in itself, thought Miriam, so she decided to investigate and invent their backstories — and what a treat it turns out to be!

Now Mercutio and Tybalt are more than best friends — they too are lovers who play at fighting with knives in a boisterous, testosterone-filled way.

We’re taken back two years before the big events to see their relationship develop and flourish. These two young noblemen care deeply about each other and that tenderness is expressed touchingly by Marcus Davis-Orrom as Mercutio and Hans Oldham as Tybalt.

Mercutio turns out to be a roisterer who swings both ways and cares little for rules and convention. Tybalt is a burly, dutiful young man who has fallen in love and must try to fall out after marriage.

Mercutio flaunts, Tybalt conceals — they are two very different people who are drawn to each other.

The structure of the piece is intriguing. It has a beginning, a middle and an end but not in that order and we dive in and out of different time periods without always knowing where we are. But that does not distract from the essence of this fine piece, which weaves Shakespeare’s own words in with the playwright’s.

This is most telling in the fight scenes, which she revisits several times during the play, each with a slightly different slant.

It’s an inventive idea and it’s not as if we don’t know how it all ends, so using it as a punctuation for the narrative works very well.

She makes no attempt to imitate Elizabethan iambic pentameter — her own dialogue is right up to date and as you would expect two educated young men to speak to each other today.

It’s not just a two-hander, though. Alannah Burns plays four roles, including a convincing Romeo, and David Gurney takes on five.

Both these actors are more than support, they have almost equal time on stage and have to show a broad range.

It’s a testament to the engagement of the piece that the only help the actors get on stage is a wooden chair, a bench and an unobtrusive but always relevant sound design from Dan Pollard.

There’s no scenery, just a wooden floor and a black brick wall. That speaks volumes for its quality.

This play was co-produced by Henley’s Daisy Smith, who recently had full production success at the Studio in New Street with Bromance: The Dudesical.

Miriam Higgins and Daisy Smith — keep your eyes on those names.