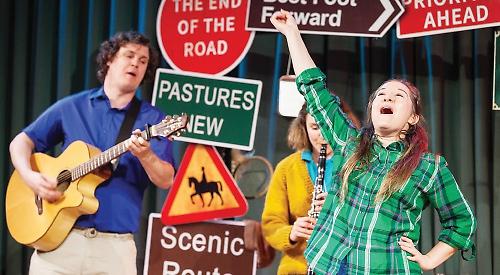 A MUSICAL history of youth hostelling is coming to Henley’s Eyot Centre on Wednesday (July 19), courtesy of a theatre company that tours the country in a narrowboat.

The Mikron Theatre Company visits the area on a more or less yearly basis and has previously staged shows sponsored by the Henley Allotments Association.

This year’s show, Best Foot Forward, traces the history of the Youth Hostelling Association (YHA) from its inception in 1914 the mind of a young German teacher-soldier who found himself in No Man’s Land during the Christmas truce along the Western Front.

Full of harmonies, hills and humour, the production then follows the founding of the YHA in Britain in the Thirties before bringing the audience up to date with the modern-day hostels that still hold true to the movement’s founding ideals.

A Mikron spokesman said of the show: “Something’s afoot at Pearling Manor and it isn’t just the walkers.

“The beautiful hostel, rich in YHA history, is lovely but falling apart. External forces are out to grab it and turn it into a golf club.

“Cue Connie, the first ever warden, with a heart as big as her rucksack. She takes us on a journey through the YHA’s past in the hope of securing its future.”

Wednesday’s show at the Wargrave Road venue starts at 7.30pm, but audience members are invited to bring a picnic from 6pm.

Written by Maeve Larkin and directed by Marianne McNamara, the show will be staged outdoors if dry and inside if wet.

There are no tickets on sale, but a collection will be taken after the show.

On Tuesday, August 1, the company will be performing two shows at the Waterfront Café in Benson. Best Foot Forward is on at 3.30pm, with Mikron’s RNLI drama In at the Deep End at 8pm.

Tickets cost £12.50 (£8 for children). The proceeds will be divided between Mikron, the Friends of Benson Library and Leukaemia Research.