Bereavement issue is swept under the rug 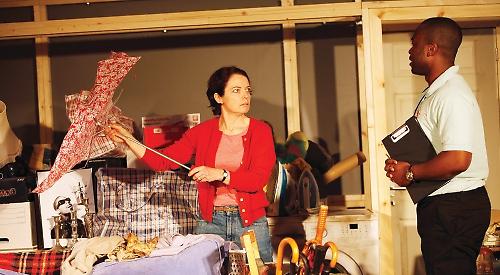 THE Watermill at Bagnor has a fine reputation for touring theatre, and its latest touring production, Nesting, is a new play by Ellen Robertson which she claims was spawned by her obsession with TV programmes about hoarding.

To some this might seem a rather strange choice for a pleasant summer’s evening at the theatre, but nonetheless we found ourselves in the extremely cluttered sitting room of Linda (Cathy Walker), who had become a hoarder since the tragic death of her husband and unborn baby.

But she was not the only inhabitant of the room — she shared it with a rat.

Rather inexplicably, since she had given it a pet name and seemed rather attached to it, she had called in environmental health to deal with the problem, and the play opens with the arrival of Jonathan (David Bonnick Jr) who has come to eradicate the rats and sort out the clutter.

Despite their differing ages the two become attracted to each other, and Jonathan, who seems a kindly soul, attempts to help Linda out of her situation.

At first it looks as if we are heading for a happy ending, but their relationship turns out to be not quite what it seems....

Because of The Watermill’s reputation, Nesting is sure to do well, but the general feeling among the audience seemed to be that they would have liked a few laughs.

Directed by Emily Burns, Nesting is now touring to village halls, rural venues and arts centres, a full list of which can be found online at www.watermill.org.uk/
on_tour_nesting

The Watermill’s next production is their big summer musical, A Little Night Music, which runs from Thursday, July 27, until Saturday, September 16.